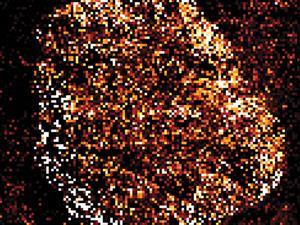 Researchers in Belgium and Ireland have taken a step towards understanding how and where bacteria attach to skin cells. Using atomic force microscopy (AFM), the team have identified bonds between proteins called adhesins on the Staphylococcus aureus cell surface and ligands on the outermost surface of the epidermis.

Strains of the Staphylococcus aureus bacteria, including methicillin-resistant Staphylococcus aureus (MRSA), can colonise on skin and cause various diseases, including infections, endocarditis and septicaemia. Understanding how and where bacteria attack could help develop new treatments and vaccines, but until now, this has been difficult, with the binding forces remaining elusive.

Now, a team led by Yves Dufrêne at the Catholic University of Louvain in Brussels and Joan Geoghegan at Trinity College Dublin in Ireland has used AFM to measure adhesion forces between bacterial pathogens and their specific ligands on the skin cell corneocyte. The scientists immobilised a single Staphylococcus aureus bacterium on a sticky colloidal probe. They then measured the interaction forces between the bacterium and immobilised corneocytes using multiparametric imaging, a recently discovered AFM mode that images the surface structure of living cells while mapping their mechanical and adhesive properties.

The approach yielded bacterial–host adhesion maps with unprecedented information about the forces between Staphylococcus aureus and human skin. Multiple bonds between adhesins on the bacterial cell surface and target ligands on the keratinised cells on the outermost cells of the stratum corneum were found to cause this adhesion. These interactions were not present on a bacterial mutant lacking surface adhesins, confirming the interpretation.

Dufrêne hopes that this technique will work for other bacteria. In particular, he says he will ‘study corneocytes from the skin of eczema sufferers along with the bacterial strains that colonise those individuals to advance the knowledge of this debilitating condition’. And Pieter Dorrestein, from the University of California – San Diego, US, who uses mass spectroscopy to study microbial communities on skin, can imagine applications beyond skin. ‘We could use these tools to understand how a microbe interacts with plaque on teeth or how a gut microbe interacts with host cells across the gut epithelial barrier.’