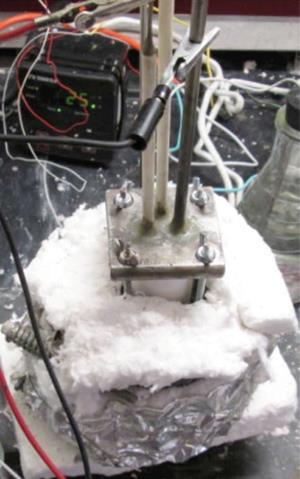 Chemists in the US have discovered a low cost way to make ammonia that could help feed the world’s growing population without contributing to global warming. Stuart Licht’s team at George Washington University in Washington, DC, has produced ammonia directly from electricity, air and steam. ‘Unlike the conventional process, which has a massive carbon footprint, this produces ammonia for fertiliser without CO2 emissions,’ says Licht.

Ammonia has transformed our world, helping grow more food, but also adding greenhouse gases. Developed in the early 20th century and still dominant, the Haber process produces it by reacting nitrogen – the major constituent of Earth’s air – with hydrogen using a catalyst like iron. That takes high temperatures and pressures, using around 2% of the world’s energy. Today the hydrogen comes from reacting methane – around 3-5% of the total consumed – with steam, which also produces vast amounts of carbon dioxide.

In recent years Licht’s team has developed ‘Solar Thermal Electrochemical Production’ (STEP), avoiding CO2 emissions in various processes, such as cement and iron manufacturing. One part of this work has been producing hydrogen from water by passing electrical current through molten salts like sodium hydroxide. Licht then read about a fuel cell made by Jason Ganley at Colorado School of Mines that generated electricity by reacting ammonia with air in molten hydroxide. The George Washington researchers first tried simply reversing that cell, without success. ‘A key to ammonia production was the addition of nano-iron oxide,’ Licht says.

Whereas previous attempts based on electrolysing water and air converted less than 1% of the electricity used to ammonia, the new approach converts 35%. ‘Less than 100% efficiency is not necessarily a loss to the process,’ Licht stresses. ‘In this case you consume current to co-generate hydrogen, which is a useful fuel.’ However, the iron oxide catalyst clumped together after a few hours’ use, dramatically reducing the cell’s efficiency, although Licht’s team is already preparing to publish a more stable design.

As well as avoiding direct CO2 emissions by getting hydrogen from steam not methane, energy consumption is two-thirds that of the Haber process. Licht expects to reduce this further and has also incorporated the approach into a system exploiting thermal energy collected from the Sun.

Ganley, who has previously worked with Licht but not on this study, says it could have ‘far-reaching benefits’. ‘The electrolyte is very inexpensive and highly conductive, and the reactants are carbon-free,’ he explains.