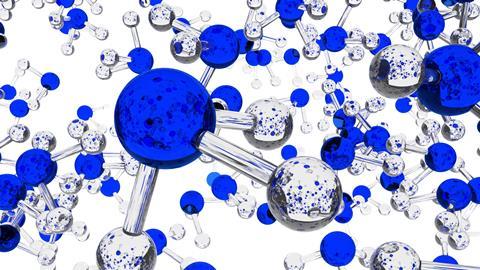 Scientists in Australia have produced ammonia in up to 60% yield at room temperature and pressure by electrochemically reducing nitrogen gas from the atmosphere in ionic liquids. This technique improves on previous approaches to nitrogen reduction, with exciting prospects for renewable energy.

As a key source of fertilisers, ammonia is one of the most important chemicals worldwide. Its use as an easily transportable energy store and source of hydrogen for renewable energy is also gaining traction. For over a century, ammonia has been industrially synthesised by the Haber–Bosch process. But this is energy intensive, requiring high temperature and pressure, and produces around 2% of global carbon dioxide emissions. A sustainable alternative would solve lots of problems. 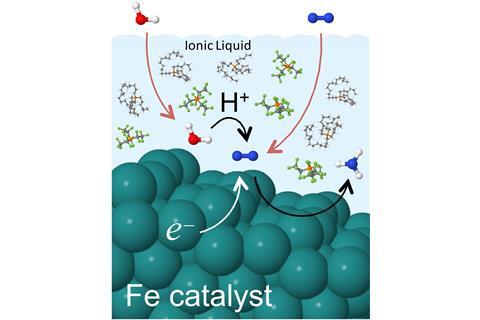 Electrochemically reducing N2 to NH3 is a possibility. Although scientists have investigated various electrodes, catalysts and conditions, their current-conversion (or faradaic) efficiencies are impractically low: less than 7% for processes involving ambient conditions. In 2014, Stuart Licht’s team at George Washington University in the US reported a way to produce ammonia directly from electricity, air and steam with an efficiency of 35%, but this involved steam in a molten hydroxide electrolyte and temperatures of 200–250°C.

Now, Doug MacFarlane’s team at Monash University has almost doubled this. Key to the success of their method is the use of certain hydrophobic ionic liquids that have very high solubility for nitrogen, but do not absorb much water. This is important in preventing the preferential reduction of water to hydrogen that occurs in the same region of potential. Typical electrolytes with a much higher aqueous content and limited solubility for nitrogen are adversely affected by this competing process. That is not to say that the ionic liquid-based approach does not produce hydrogen: it is in fact the only byproduct.

MacFarlane thinks the significance of their process is enormous: ‘Ammonia is readily transportable and can be used directly as a fuel, or cracked back into nitrogen and hydrogen for use in fuel cells.’ The hydrogen also represents a form of stored energy and MacFarlane says it is important to consider how they can separate and use the byproduct productively.

Joshua McEnaney, part of Jens Nørskov’s group at Stanford University in the US that recently reported an alternative route to ammonia production centred around a lithium cycling strategy, finds the high efficiency and mild conditions encouraging. ‘It will inspire researchers to continue to build upon the efficiencies and yields of this work and related systems,’ he says.