Magnetic bacteria cause a stir

Researchers in China use magnetotactic bacteria to mix reagents in microreactors

Using bacteria as tiny stirring bars could be a new way to accelerate chemical reactions in droplets. Researchers in China have shown that they can significantly speed up an epoxidation reaction within a Pickering emulsion droplet by using naturally magnetic bacteria to mix the catalysts and reactants. 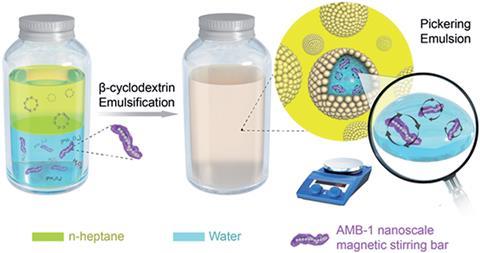 To make the Pickering emulsion system a water phase containing Na3PW12O40 catalyst, H2O2 oxidant and the bacterial stirring bars, and an oil phase composed of cyclooctene in n-heptane solution, is emulsified

Pickering emulsions are emulsions of oil and water stabilised by solid particles, such as silica particles, to give distinct micro-droplets that do not coalesce. These droplets can act as microreactors for all manner of chemical reactions from simple synthetic chemistry to polymerisation reactions.

Carrying out chemical reactions in Pickering emulsions avoids the large temperature and concentration gradients associated with traditional reaction systems. ‘But still, we need to find a way to stir the solution inside these micro-droplets. And this is the reason why we carried out this study to develop nano-sized stirrers,’ explains Weiguo Song from the Chinese Academy of Sciences.

Researchers in China have used bacteria susceptible to magnetic fields as nanoscale magnetic stirring bars in a Pickering emulsion reaction system. These bacterial stirring bars could help improve the reaction rates of many chemical reactions and processes.

Song and his colleagues have shown that magnetotactic bacteria, which align with external magnetic fields because they contain magnetic crystals, can act as nanoscale stirring bars within the microreactor droplets of a Pickering emulsion system. With the bacteria encapsulated within the micro-droplets, placing the reaction system over a rotating magnet causes the individual bacteria to rotate and thus stimulate the reaction mixture.

Using the epoxidation of cyclooctene as an example, the bacterial stirring bars increased the rate of reaction by up to 30 times in comparison to traditional stirring, and by up to 3 times when compared to a static Pickering emulsion. 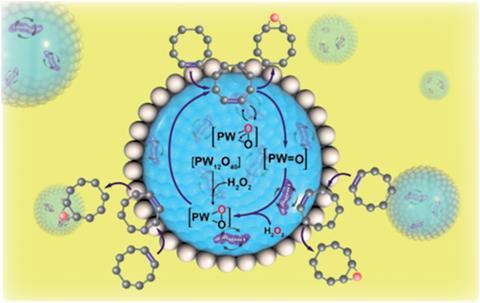 The researchers tested their tiny stirring bars on an epoxidation reaction

‘In my opinion, this is quite an unusual study and I’m not sure I fully understand why their approach works!’ comments Andrew deMello, a researcher who works on nanofluidic reaction systems for chemical synthesis at the Swiss Federal Institute of Technology in Zurich. ‘However, looking at the average size of the water droplets within the water-in-oil emulsion and the size of the bacteria, their ability to enhance mass transport in such a dramatic fashion is quite surprising.’

Song’s team are now looking to broaden the applications of these nanoscale bacterial stirring bars by applying this concept to other synthetic reactions and emulsion systems, and even coating the surface of the bacteria with nanoparticle catalysts to give the bacteria a secondary role as a catalyst carrier. ‘In general, this is an interesting and unusual study,’ concludes deMello. ‘And as suggested by the researchers, loading magnetotactic bacteria with nanoparticle-based catalysts could be a very smart way of enhancing other reactive systems.’