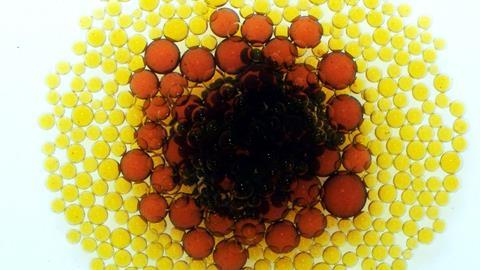 The creation of a surfactant system that uses light, magnetism and electrostatics to move liquid droplets around has allowed these beads to be assembled into structures, rotate like mechanical gears and fuse together. The work offers tantalising possibilities, including microreactors with unprecedented control of reactions or light-guided inks for 3D printing.

Responsive surfactants have been made before that can respond to two stimuli, but most just respond to one. Now, Bartosz Grzybowski and his colleagues at the Institute for Basic Science in Ulsan, South Korea, have made surfactants that can react to three different stimuli.

‘Depending on what you make the nanoparticles from the surfactants can be responsive to a range of fields – magnetic, light, electrostatic,’ says Grzybowski. ‘I am not sure how all these properties could be combined into one molecule by traditional syntheses. With nanoscience this becomes relatively trivial – we initially just toyed with stuff and it turned out something cool emerged.’

The team initially made nanoparticle dimers that brought together the desired responsive properties. The dimers were part gold, which can be manipulated with light, and part iron oxide, which is magnetic and even more responsive to light than gold. The researchers also made a second ‘dummy’ nanoparticle dimer that contained non-magnetic but light-responsive lead sulfide instead of iron oxide to have more flexibility over the magnetic response. By mixing the two types of nanoparticle together in different proportions it enabled Janus-like droplets with varying magnetic susceptability.

However, to turn the nanoparticle dimers into surfactants capable of encasing droplets the team next needed to decorate the dimers with hydrophilic and hydrophobic molecules. To do this, the gold was functionalised with mercaptoundecanoic acid making it attract water, while the iron oxide and lead sulfide were tethered to oleic acid ligands to make them repel water.

To test the nanosurfactants, the team devised several experiments involving surfactant-coated droplets between 400 and 2000μm in diameter, suspended in a solvent. Magnetic control was demonstrated by making three kinds of droplet, each dyed blue, red or yellow to represent varying degrees of magnetic susceptibility. When a magnet was applied to a random mixture of these droplets they remained intact and organised into a bullseye pattern (see first video). In another experiment, the team showed that droplets moved towards a laser beam and if the beam hit the edge of a droplet it began to rotate rapidly, causing neighbouring droplets to spin too (see second video).

‘The magnetic effects were expected but that these droplets rotate under light and transmit rotation to their neighbours like mechanical gears was unexpected,’ explains Grzybowski. ‘My guess was that if two liquid droplets sheared against one another, they would just merge but our nanosurfactants turned out to be quite sturdy, like a very thin armour that prevents the liquids from mixing.’

The team found that droplets move and rotate under laser light because the surfactant coating converts some of it to heat. This localised heating alters the surface tension between the droplet and the solvent and creates convective flows. Depending where the light is focused, these flows can cause a horizontal force that attracts the droplets towards the laser beam or drag a droplet’s surface causing it to rotate.

While light and magnetism could move the coated droplets, the team next showed that applying an electric field could fuse droplets. To demonstrate the potential of the system for use in chemical reactions, the team created a dumbbell shaped ‘reactor’ by electrostatically welding two droplets containing a red dye and hydrochloric acid. A magnet kept the droplet reactor fixed in position while a laser beam heated the surfactants, causing convective flows inside the droplet, mixing the contents. Another experiment demonstrated a timed sequence of two reactions involving three such reactors (see third video).

‘The research opens up new horizons for addressable emulsions, which can be manipulated by external fields to build structured systems, and this is simply not possible with common passive or inert surfactants,’ comments Julien Eastoe, a surfactant chemist at the University of Bristol, UK. ‘Potentially the work could be applied to encapsulate valuable components, such as agrochemicals or drugs, and then release them with precise spatial and temporal control. Other possible applications are in 3D printing of locally functionalised internal surfaces.’

Grzybowski says 3D printing using these droplets might be possible but his favourite application lies elsewhere. ‘When we could do sequences of reactions in these droplet systems I was ecstatic,’ says Grzybowski. He thinks that an alternative to microfluidic systems is the most promising use for the nanosurfactants. ‘One can guide these microreactors with light, fuse them on demand and quite easily control sequences of reactions,’ he explains. By contrast, microfluidic devices are complex and solvents are often incompatible with the plastics they are made from.

‘The option to combine droplets of different size, content and properties in one system is of enormous practical interest,’ comments Annette Schmidt, who investigates responsive surfactants at the University of Cologne, Germany. But she says it still needs to be demonstrated on smaller structures that are comparable to ’lab-on-a-chip applications with complex, nano- or micron-sized reaction containers’.

However, Grzybowski envisages a system of nanoreactor chemical factories that does away with physical channels altogether. Instead, he wants to use a photomask containing a blueprint that could produce ‘virtual’ channels of light. ‘The droplets will localise to the irradiated regions, or virtual channels, and can then be pushed along,’ he explains. But to achieve this, he says a better system is needed to guide the lasers that move the droplets. He adds that they’re currently working on producing a computerised system to do just this. ‘We have some cool systems here in the works but I would prefer to remain silent now,’ Grzybowski adds.