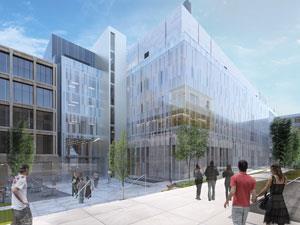 The four storey MIT.nano building will house 2000 researchers from 150 teams

A new $350 million (£207 million) laboratory building at the Massachusetts Institute of Technology will break down barriers traditionally separating subjects in the name of nanoscale research. Dubbed MIT.nano, the building is due to open in 2018 and could eventually accommodate around 2000 investigators from over 150 research groups spanning chemistry, engineering and bioscience.

MIT.nano aims to both enhance innovation by encouraging interdisciplinary research and provide the financial power needed to get the best equipment. ‘It is a shared space in a state-of-the-art building that will house state-of-the-art instrumentation, all in one place,’ MIT’s Moungi Bawendi tells Chemistry World. ‘The shared space also makes it conducive to students initiating new collaborations. I expect that there will be many new activities fostered by this new space.’

‘MIT.nano has the most complex set of nanotechnology groups ever assembled in a single place,’ says Vladimir Bulovic, professor of emerging technology at MIT. ‘Tools that none of the individual faculties can afford, as a group of 2000 users we can certainly maintain as a central facility.’

The four-storey building will contain two floors of cleanroom material growth and fabrication facilities typically used to process semiconductor materials and make electronic devices. ‘There will be the usual cleanroom facility equipment, but there will also be chemistry space to facilitate the incorporation of novel materials in state-of-the-art device structures,’ Bawendi explains.

One floor will be the ‘quietest’ space on MIT’s campus, with minimal vibration and electromagnetic interference, housing electron microscopy equipment and other advanced imaging technologies. One floor will be dedicated to teaching laboratories, while the building will also contain a computer-aided visualisation environment or CAVE, displaying nanoscale features in high-resolution.

As well as Bawendi’s quantum dot research team, the chemists who’ll use the building include Timothy Swager’s group, which has a strong focus on developing chemical sensors. Chemical engineers like Robert Langer and Gregory Rutledge are also among the researchers set to work there.

Users of the building currently in the central-campus space MIT.nano is now destined to occupy will be relocated by June, and demolition work will start in spring 2015. Building work will begin shortly thereafter, bringing the most modern facilities to what Bulovic notes is already a bustling campus. ‘Our present facilities are twice as busy as any other research lab in the world,’ he observes. ‘Opening MIT.nano will enable us to fulfil our desire to be even more productive.’