An electronic device that exploits the semiconducting properties of a two dimensional metal-organic framework (MOF), a material analagous to graphene, has been made for the first time.1 The device – a chemiresistive sensor – reversibly detects ammonia and boosts hope that conductive MOFs could be used for a variety of further applications, including electrocatalysis and renewable energy storage.

Chemiresistive sensors are used in areas such as air quality monitoring, food spoilage and explosives detection. They are typically made with metal oxides and, more recently, carbon-based nanomaterials including graphene. Such materials can act as an electronic ‘nose’ by changing their electrical resistance in response to the presence of a desired chemical analyte.

However, the structure of these materials cannot be controlled at an atomic level which limits their tunability. By contrast, the modular nature of MOFs makes them highly tunable. And being microporous, their pore size can be altered to potentially discriminate for selectivity. However, the absence of electrical conductivity has hindered their use as chemical sensors.

‘The lack of MOF-based devices […] to date has been limited by a lack of MOFs that display electrical conductivity,’ explains Mircea Dinca whose lab at Massachusetts Institute of Technology, US, developed the sensor. ‘The new 2D MOFs that we have reported display record high conductivities, [which] enabled us to construct a MOF-based sensor device for the first time.’ 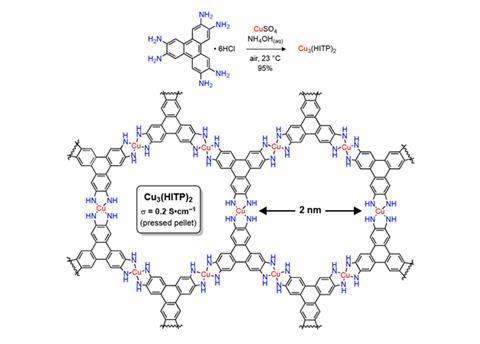 Previously, the team made conductive 2D wafers of a nickle-based MOF, analagous to graphene.2 But while graphene must first be doped to acquire semiconducting properties, Dinca’s MOFs are naturally conductive. In the new work, they switched nickel for copper and observed the new material had a reversible ‘turn-on’ response to sub-ppm levels of ammonia vapour; the conductivity became higher in the presence of ammonia vapour, and lower again when the vapour was removed.

Since ammonia is often used as a test analyte for chemical sensors, the team were able to easily compare their sensor’s performance to a variety of known sensors. ‘We were pleasantly surprised by the performance,’ says Dinca. ‘Especially with regard to reversibility and sensitivity, which compares favourably to established sensing technologies such as metal chalcogenides and carbon nanotubes.’

Matthew Hill, who investigates MOFs at CSIRO, Australia’s national science agency, thinks the work is ‘a real step forward’ for the use of MOFs in sensors. ‘To date, it has been difficult to engineer MOFs that sense changes in conditions required for real-world usage,’ he says. ‘I look forward to further analyses revealing the progress towards a MOF semiconductor, as this could open new fields of research.’

By using other metals in their MOF, Dinca predicts other analytes could be detected. ‘Now that we have established a way to make conductive MOFs, that opens the door to explore applications that weren’t available to us before,’ he says.