Rotaxane ‘switch’ has been successfully wedded to a metal–organic framework 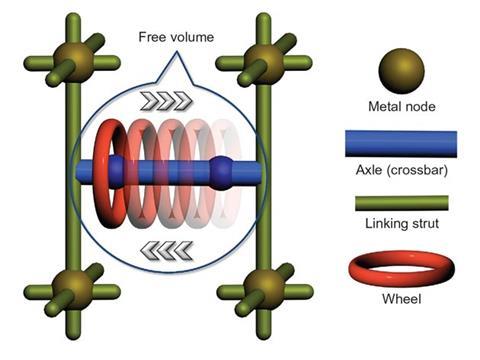 The rotaxane sits between links within the metal-organic framework

Scientists in Canada have for the first time incorporated a ‘molecular shuttle’ into a metal–organic framework (MOF), raising the possibility of future solid-state nanotechnologies based on interlocking molecules.

Such a bottom-up approach to nanotechnology was first proposed by Richard Feynman in his 1959 lecture, There’s plenty of room at the bottom. Nanotechnology has since grown into a large scientific enterprise, with many in the community attempting to replicate macroscale devices on the atomic scale. 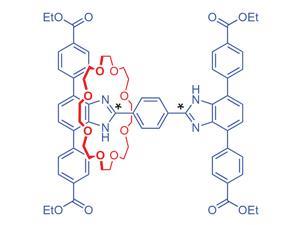 One such device, the molecular shuttle or rotaxane – an interlocked assembly containing a molecular ring that can move back and forth between two locations – has the potential to mimic a macroscopic switch but has only been synthesised in solution and not solid-state.

Kelong Zhu and his colleagues at the University of Windsor have overcome this obstacle by inserting a rotaxane into a MOF between two of the framework’s struts. The shuttle is made up of a crown ether macrocycle and two benzimidazole sites, which act as the destinations. The researchers argue that this arrangement provides a regular and coherent motion between two MOF struts – a property that is hard to achieve in solution.