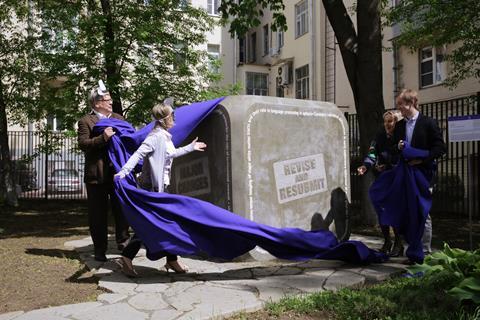 A monument celebrating the ‘anonymous peer reviewer’ has been unveiled at the Institute of Education of the Higher School of Economics (HSE) in Moscow. This is believed to be the first such homage to the ‘unsung heroes of science’, as the 2007 economics Nobel laureate Eric Maskin called them.

The sculpture was proposed by HSE’s vice rector, Igor Chirikov. During the unveiling event, Chirikov said that when he started working in academia he realised that peer reviewers’ contributions aren’t always recognised. ‘It’s hard to deal with rejection letters and, sometimes, nasty comments from reviewers,’ Chirikov added. ‘Peer review in academia is a story of love and hate, but reviewers are invisible heroes in science.’

The monument itself is made of concrete, shaped like a die and has words on each side typical of a peer reviewer’s decision on a paper. These include ‘accept’, ‘minor changes’ and, of course, the feared ‘reject’. The project was crowdfunded and was supported by Nobel laureates including Maskin and 2010 physics laureate Andre Geim who both attended the ceremony.