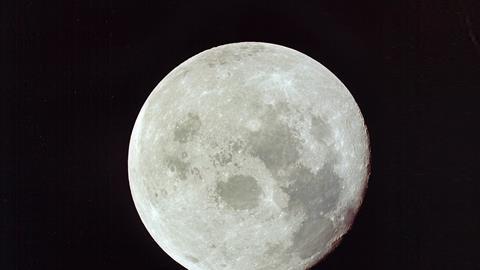 Moon may be millions of years older than previously calculated

A new study involving samples collected during the last mission to the moon has suggested that the satellite was formed roughly 50 million years after the formation of the solar system. The researchers reached their estimate by investigating the ratio of hafnium to tungsten-182 in the fragments of the lunar mantle, collected by the Apollo 17 mission.

It’s thought that the moon was formed by a massive impact between a proto-Earth and another planetary body, a theory supported by the incredible chemical and isotopic similarities shared by us and the moon today. Despite this general agreement, however, there has been significant debate regarding the moon’s precise age. Some researchers have argued for an ‘old moon’ model, with formation taking place roughly 30 to 100 million years after solar system formation (SSF), while others have suggested that formation could have been as late as 200 million years after SSF.

One of the core aspects of this debate is the relative abundance of tungsten-182 in lunar basalts when compared with similar materials on Earth. It’s been theorised that this small abundance is the result of in situ beta decay of hafnium-182, which would place lunar formation between 30-60 million years after SSF. If the moon was formed after that time period, hafnium-182, which has a half-life of 8.9 million years, would already have become extinct in our solar system at the time of the impact. This theory is disputed, however, as hafnium-182 decay was roughly the same on both the Earth and the moon.

Now, a team led by Carsten Münker at the University of Cologne in Germany has used information collected from Apollo 17 moon rock samples to model possible mechanisms of moon formation. Their results indicated that the moon’s core, which accounts for 1-3% of its mass, would have been sufficient to scavenge tungsten from the Earth’s core during formation, increasing the Earth’s hafnium to tungsten ratio while decreasing its own. In situ decay of hafnium-182 then further increased the levels of tungsten-182 to the levels we see today.

This theory would explain both the two bodies’ varying levels of tungsten-182 and the ratios that have been observed. It also provides insight into the age of the moon, as due to hafnium-182’s half-life, the isotope could only have been involved if the moon was formed between 40 and 60 million years after SSF.