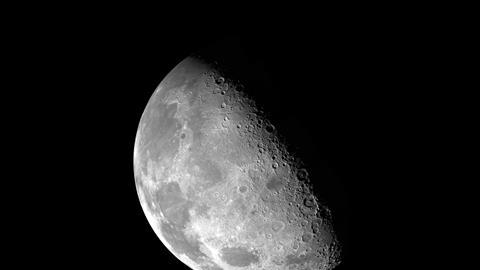 First definitive proof of water on the moon

For the first time, scientists have found unambiguous evidence for water on the moon. Most of this ice is likely trapped inside glassy rocks formed during meteorite strikes. Rather than a single large ice mass, the water is likely distributed in thousands of tiny shadowy patches around the lunar south pole, which would make it an abundant resource for lunar missions.

Liquid water can’t exist on the moon due to the temperature and pressure on the surface. Water vapour is also essentially non-existent – it quickly decomposes under the intense sunlight as the moon doesn’t have a protective atmosphere. Nevertheless, scientists have speculated since the 1960s that there might be water ice on the moon, but this was never definitively proven. The clearest evidence came in 2009, when researchers detected infrared absorption at 3μm – a band that corresponds to some of water’s vibrational modes. While this signal does correlate to water, it also encompasses hydrates and hydroxides, and it’s impossible to tell from this signal which one it is. 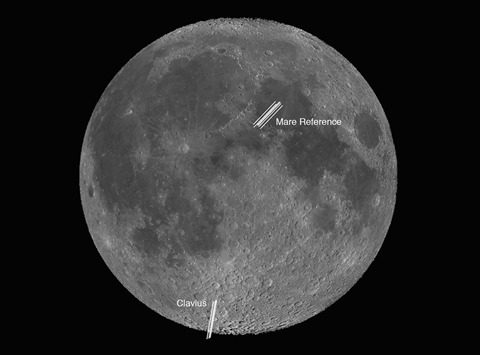 Two of the sites investigated in the search for water on the moon. While, no water signal was discovered in the northern regions it was detected  in the southern polar regions

Researchers led by Casey Honniball at the University of Hawaiʻi at Mānoa, US, have now found the first unequivocal evidence of ice on the moon using water’s spectral signature at 6μm, a band that doesn’t include hydroxides or any other lunar materials.1 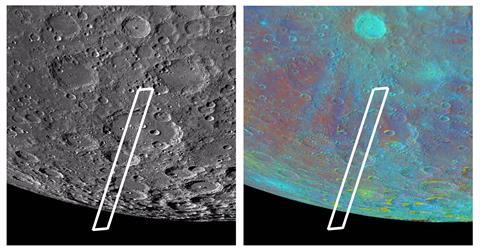 A close-up of the Clavius crater where an umambiguous water signal was detected (left). Variations in the composition of the region are highlighted by a UVVIS colour ratio overlay (right)

Using the Stratospheric Observatory for Infrared Astronomy, an infrared telescope mounted on an aeroplane, the team found water signals in the Clavius crater in the moon’s rugged southern highlands but not in the more northerly planes of the Mare Serenitatis. The researchers conclude that the ice is most likely trapped in impact glasses, which form when small meteorites strike the lunar surface. However, it remains unclear whether the water comes from these meteorites or whether the impact creates water by converting lunar hydroxides.

Although Honniball and co-workers only examined a small region of the lunar south pole, trapped water could be widely distributed. In separate study, Paul Hayne and colleagues from the University of Colorado Boulder, US, estimate there are 40,000km2 of cold traps – shadowy regions in which ice could accumulate – on the lunar surface.2

Analysing data of permanently shadowed areas from the Lunar Reconnaissance Orbiter, Hayne’s team found 60% of these cold traps are around the lunar south pole. But rather than the large craters previous studies have focused on, the researchers suggest that most cold traps, up to 20%, are tiny patches less than a centimetre in diameter.

While Hayne and colleagues can’t yet say whether all cold traps actually contain ice, their sheer number would make them an easily accessible resource for future lunar missions.