‘Pencil nanodots’ – carbon nanodots less than 5nm in diameter – have been produced from the leads of graphite pencils by researchers in China, Australia and Singapore. The nanodots are simple and cheap to make using graphite pencil electrodes to electrolyse a solution of sodium hydroxide. The nanodots were photostable and apparently non-toxic, and could be used to augment solar cells. 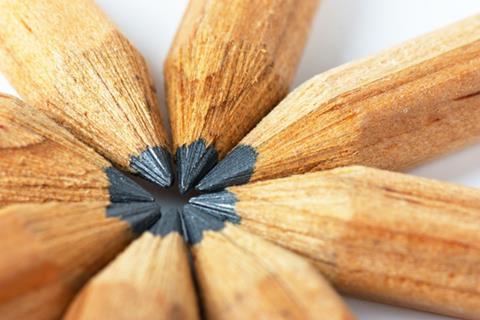 Mesoporous materials – natural or synthetic materials containing pores between 2nm and 50nm in diameter – have been investigated for catalysis, sensing and optoelectronics. They can absorb a variety of different ‘guest’ nanoparticles into their pores, thereby potentially allowing tunable optoelectronic properties. One promising way to produce them is to directly co-assemble the host particles and the guest structure simultaneously using a template that is later removed. However, the host structures are formed by weak, non-covalent forces, and adding guest particles larger than about 10nm disrupts these.

In new work, Cordelia Selomulya of Monash University in Australia and colleagues in Shanghai and Singapore produced nanoparticles about 3nm in diameter using ordinary pencils. The pencils’ graphite was used as both the anode and cathode in an electrochemical device, with ethanolic sodium hydroxide as the electrolyte. Free radicals in solution exfoliated 3nm pencil nanodots covered in carboxyl and hydroxyl functional groups from the anode. The researchers then used polymer templates to construct mesoporous materials made out of a range of materials, including titanium and silicon dioxide, and were able to get the nanodots to sit neatly within its pores thanks to hydrogen bonds between the dots and the structure.

The current generated by titanium dioxide under simulated sunlight was enhanced by 36% with the addition of the nanoparticles, suggesting promise for solar power. Furthermore, the pencil leads’ inherent porosities made them easy to dope. Nitrogen-doped nanodots, for example, could be produced by soaking the pencil leads in melamine. Nitrogen-doped pencil nanodots added to titanium dioxide performed even better than plain nanodots, enhancing photocurrent density by 183%. Using different precursors, the researchers also doped nanodots with boron, phosphorus and sulfur, all of which showed different optical properties.

The researchers are now investigating the potential uses of the nanodots in other areas, such as biomedicine. ‘A preliminary study indicated they showed low toxicity towards biological tissue and cells,’ says Selomulya. ‘However, more studies need to be done.’

Mietek Jaroniec of Kent State University in Ohio is impressed: ‘This work represents a very interesting and important contribution to the chemistry of nanomaterials,’ he says. ‘It shows a simple, feasible way to obtain graphitic nanodots from commercial graphite used in pencils, and to create a new class of nanomaterials for optical and other advanced applications by incorporating them into various ordered mesostructures.’