Nanoparticle cats drawn at the flick of a switch

A new way of using light to reversibly assemble nanoparticles has been developed by scientists in Israel. The group used their technique to make colourful images of flags and cats, but say it could potentially have many other applications. 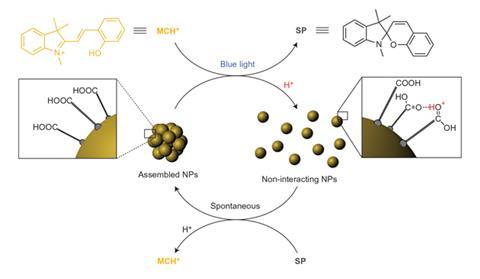 Exposing the solution to blue light makes it more acidic, causing the clumped nanoparticles to disassemble

The researchers added gold nanoparticles functionalised with carboxyl groups to acidified methanol and added spiropyran. Spiropyran acts as a base, drawing protons from the carboxyl groups and causing hydrogen bonds to form between the nanoparticles, which assemble into clusters and rapidly precipitate. But when the sample is brought near a blue light source, the spiropyran releases the protons, acidifying the solution and breaking the hydrogen bonds, and the nanoparticle clusters re-dissolve. The reaction can be reversed more than 100 times with no apparent loss of photo-responsiveness.

The yellow solution turns red as the gold nanoparticles dissolve, so the team demonstrated the technique by immobilising the reactants in polymer gel films and irradiating them through patterned masks. They produced images of several countries’ flags and the Cheshire cat from Alice’s Adventures in Wonderland, which disappeared within three minutes when the light was turned off.

The researchers say that the reaction could have many uses. They showed that when the nanoparticles aggregate, they can also bind nitrobenzoxadiazole dye molecules. This suggests the potential to reversibly trap and release functional molecules in solution using light. Beyond this, they believe it should be possible to control the aggregation of other molecules. ‘It is much easier to prepare molecules that are pH-responsive than light-responsive,’ says Klajn. They are now studying the technique to control protein aggregation.

Rienk Eelkema of Delft University of Technology in the Netherlands is impressed by the ability to produce self-assembly and disassembly in response to a transient chemical signal, in this case acidity. ‘Many signalling pathways and feedback loops in living systems are based on exactly that notion,’ he says, ‘But that’s completely absent from the synthetic literature.’