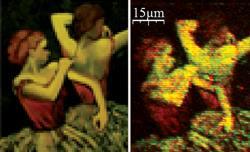 Nanoscale direct-writing techniques like dip-pen nanolithography (DPN) can only create a limited range and complexity of patterns, because of problems realigning the tool after refilling the molecular ink or after switching from one ink to another. David Klenerman and colleagues at the University of Cambridge have made a nanopipette that not only generates large patterns without the need for refills, but can also be switched between different inks without interrupting the writing process.

Klenerman’s pipette has two nanoscopic channels, each fitted with an electrode. Molecular ink is deposited from either channel depending on the current polarity. The current also acts as an analytical tool: it will only flow when the pipette approaches a surface and a meniscus is formed. The distance sensitivity of the current allows the researchers to exert feedback control on the positioning of the pipette above the surface.

Klenerman’s group used antibodies as the molecular ink to make features measuring between 440 nm and 630 nm. By switching to two DNA molecules marked with different fluorescent labels as the inks it was possible to print in two tones at small scales. Using this technique Klenerman reproduced a portrait of Isaac Newton, and a painting inspired by Degas. Each image was made up of 75 x 62 pixels, with a pixel size of one micrometer.

Klenerman hopes to improve the technique, by mirroring developments in other techniques. ’DPN has not produced as complex patterns as we have achieved to date but certainly has produced finer features,’ he told Chemistry World. ’We could consider optimising humidity and writing conditions, as done for DPN, to get smaller features and may be able to get close to our pipette diameter- about 100 nm.’ Michael Gross