Nanosilver in consumer goods under the spotlight 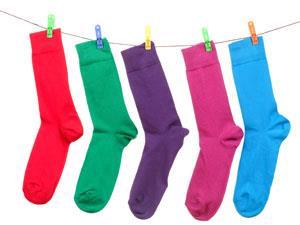 The use of silver nanoparticles in textiles, such as insoles and running shirts, to control unpleasant odours produced by bacteria, appears to present little danger to human health or the aquatic environment, according to a new report by the Danish Environmental Protection Agency (EPA). The research team also discovered that none of the products marketed as antibacterial actually contained nanosilver, a material that has been the subject of some controversy.

‘Concerns were raised in the Danish parliament that the use of nanosilver in textiles was growing rapidly and there was concern that so much was being used without knowing sufficiently about its effects on human health and the environment,’ explains Flemming Ingerslev of the Danish EPA. Specifically, some consumers were concerned about the risks of silver entering the body through the skin and being released into the sewage system from washing.

The team sought out textiles sold in Denmark that claimed they contained silver, nanosilver or had antibacterial properties. But the researchers were able to find relatively few, says Ingerslev. Chemical analysis on 16 products that claimed to contain silver or nanosilver discovered that the highest concentrations of silver were found in a microfibre washing cloth and an insole; the lowest were in a shower curtain and a running shirt.

A further particle analysis of 12 products – selected for their high silver content – found that only two (microfibre cleaning cloth and the shoe insole) contained micro-sized particulate silver matter. This silver would not be described as nanoparticles under the EU definition – 1–100nm in diameter.

The study also found a low risk from three scenarios: wearing insoles 8 hours a day; a 3-9 year-old child wearing a tank-top for 16 hours a day; and a 2 year-old child orally exposed to a cuddly toy. The report concludes: ‘Based on existing data, there appears to be no risk of health effects or biological effects in the aquatic environment arising from the use of nanosilver in the textiles in the survey.’

Similar results have also been found by Swiss researchers, says Bernd Nowack of the Swiss Federal Laboratories for Materials Science and Technology. ‘They were surprised to find so few silver-containing products and we have found this, too. The main problem is that we don’t know what is in products, and they found this too. Some say they contain silver and don’t. Some don’t say they contain silver and do.’

Nowack also points out that the Danish report cites some very low concentrations of silver, many below 1mg/kg. ‘You need 20mg/kg or over to have an antibacterial effect so I would consider these levels to be background levels and not necessarily indicating these products contain silver.’

Bacteria can be killed by silver ions, as they interfere with key enzymes that help to maintain the bacterial cell wall. The scientists at Rice University in the US produced silver nanoparticles in anaerobic conditions to test whether it was just the silver ions that were killing the bacteria. Bacteria exposed to these elemental silver nanoparticles survived at concentrations of 195ppm, while ionic nanosilver killed bacteria at just 15ppb – it’s more than 7600 times deadlier than elemental nanosilver.

The team also discovered that exposure to sub-lethal doses of silver ion-releasing nanoparticles actually improved bacterial survival rates. They warn that manufacturers including nanosilver in their products need to carefully consider how much is needed to effectively kill the bacteria, or it could actually have the opposite effect, promoting survival.