New catalyst for methane to methanol

Chemists in Germany have invented a new solid catalyst for converting methane to methanol. The system could eventually provide a smaller-scale alternative to current commercial methods for methanol production from natural gas, which rely on big, expensive industrial facilities for steam reforming of methane to syngas - typically so-called ’megamethanol’ plants where there is a large supply of natural gas.

However, natural gas is often found in smaller quantities in remote locations where its transportation cannot be justified economically. Here, smaller-scale conversion to methanol could be the answer. For many years people have searched for new ways to convert methane to methanol. One promising technique used a platinum-based catalyst developed by Periana and colleagues,1 in which platinum is co-ordinated to a bipyrimidine. This is then dissolved in fuming sulfuric acid - oleum - to carry out the oxidation, which involves sulfur trioxide. However, the expensive platinum proved difficult to recover from solution.

Now, a team led by Ferdi Sch?th at the Max-Planck-Institut f?r Kohlenforschung in M?lheim have created what is in effect a solid Periana catalyst which appears to be recyclable with no loss of platinum.2

’Colleagues of ours created a highly porous carbon-nitrogen polymer, which we realised had very similar structural motifs to the Periana catalyst,’  Sch?th says, ’so we wondered if we could incorporate platinum into the structure.’

The process proved surprisingly simple. The polymer is created by trimerising the aromatic nitrile 2,6-dicyanopyridine in molten zinc chloride. This trimer is then polymerised by heating to form an amorphous, highly porous ’triazine-based framework polymer’. ’Simply by dropping the platinum precursor and the polymer into the oleum, the catalyst forms in situ,’ says  Sch?th. 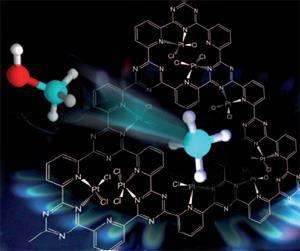 The reaction used a solid catalyst in a covalent triazine-based framework. The material possesses bipyridine units as coordination sites for platinum. It shows high activity and can be separated easily from the reaction mixture and recycled several times without significant loss of activity.

If the mixture is then pressurised in an autoclave with methane, the methane is consumed and methanol formed at conversion rates comparable to Periana-based systems but with the solid catalyst easily recoverable at the end of the reaction.

’We are now looking at ways to improve the activity of the system,’ Sch?th says. ’We would like to move the process from batch to continuous, and ultimately find a way of carrying out the conversion in the gas phase.’

Justin Hargreaves, a catalyst expert at the University of Glasgow in the UK, says that the German researchers have produced ’a very interesting study.’

’To heterogenise a homogeneous system provides a significant advantage,’ Hargreaves adds. ’Whilst the reaction is undertaken at low temperatures, which potentially provides selectivity advantages with   respect to direct partial oxidation with oxygen, regeneration of sulfur trioxide by oxidation of sulfur dioxide and the use of concentrated sulfuric acid are required.’