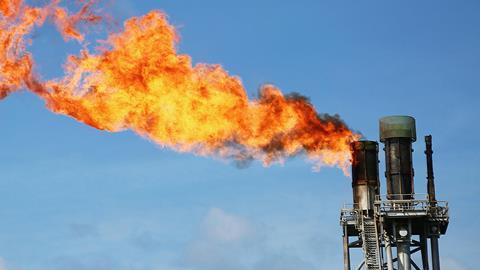 A new way to turn methane into methanol using only water could help to significantly cut carbon emissions by ending gas flaring at oil fields and create a useful chemical feedstock at the same time. The details remain uncertain, however, and the researchers admit that far more work is required to establish the process’ industrial viability.

Methanol is a valuable source of industrial chemicals and over 30 million tonnes are consumed every year. The direct oxidation of methane to methanol would therefore be a highly attractive industrial process. However, commercial methanol production currently requires the endothermic conversion of methane to synthesis gas – a mixture of carbon monoxide and hydrogen – which is then converted to methanol. This is only feasible in huge facilities, so remote oil-extraction facilities often simply burn any methane produced. A 2011 World Bank report states that flaring is responsible for 1.2% of global carbon dioxide emissions. Mechanisms for direct oxidation of methane have required expensive, strong oxidants and been plagued by over-oxidation of the methanol, producing, for example, carbon monoxide and formates.

In the new research, Jeroen van Bokhoven and colleagues at the Paul Scherrer Institute in Switzerland unveil a chemical looping reaction using a zeolite produced by passing copper nitrate solution through the commercially-available zeolite sodium mordenite, causing the sodium ions to be exchanged for copper ions. After drying and calcining the zeolite, the researchers pumped methane through it. They found that most of the methane was oxidised to methanol – spectroscopic investigation suggested that divalent copper–oxo sites present in the zeolite had been responsible for this reaction. These sites were reduced to monovalent copper sites in the process. However, the researchers found that some of these sites could be re-oxidised by heating the zeolite to 400°C and passing water vapour through it. Experiments with oxygen-18 labelled water suggest that the water vapour is split into hydrogen and oxygen inside the zeolite, with the oxygen regenerating the zeolite’s active sites.

Source: American Association for the Advancement of Science

However, the spontaneous reaction of methane and water to produce methanol and hydrogen is not thermodynamically feasible, as the Gibbs energy of the products is higher than the reactants. But the researchers argue that this is irrelevant as the overall reaction does not occur spontaneously. Instead, they argue, recovering the active divalent copper sites requires the endothermic desorption of water molecules – which involves adding energy to the system. The reactivated zeolite actually showed much higher selectivity for methanol. ‘Presumably, not all the copper species were reactivated into the same condition,’ explains lead author Vitaly Sushkevitch.

Robert Schoonheydt of the University of Leuven in Belgium, who was not involved in the research, is impressed by the demonstration that water can behave as an oxidant when turning methane to methanol, although he says the theory presented in the paper is ‘largely hypothetical’ as the exact nature of the copper active sites present in the zeolite is not properly understood. He adds that the reaction is, at present, ‘far from industrially feasible’. The researchers acknowledge this and now intend to study the reaction mechanism in more detail, as well as optimising reaction rates and looking into the feasibility of scaling the process up.