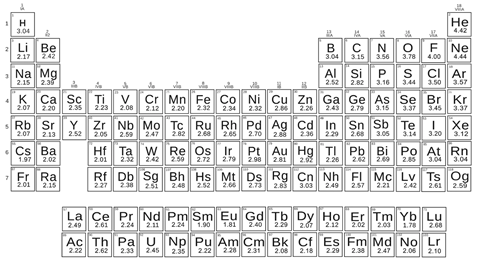 Researchers in Russia have modified the formula for the fundamental concept of electronegativity, making it more useful for predicting other aspects of chemistry. Artem Oganov and Christian Tantardini from Skolkovo Institute of Science and Technology, Moscow, made a simple-looking change to the equation originally devised by Linus Pauling in 1932. The new formula aligns better with whether reactions release or absorb energy, and avoids strange predictions that the original made for metal-containing modules.

‘Electronegativity is probably the most important chemical property of the elements,’ says Oganov. It denotes how evenly or unevenly electrons are shared between atoms in a chemical bond. As such the idea often explains which chemical reactions the laws of thermodynamics will allow to work. But Pauling’s definition sometimes doesn’t represent reality well. ‘Looking at Pauling electronegativities, you will see that in molybdenum borides or tungsten hydrides, metal atoms should be negatively charged, and non-metals positively charged, which is outrageous for chemical intuition,’ Oganov says. ‘Our scale corrects this problem.‘

Oganov had been defining electronegativities of elements at high pressure to help explain exotic chemical phenomena taking place under these conditions. He asked his PhD student Tantardini to check whether their computational approach could produce atomic electronegativities at zero pressure. ‘To our surprise, you cannot reconcile bond energies, both calculated and experimental, and the values of Pauling’s electronegativities,’ Oganov says. ‘When the electronegativity difference is large, Pauling’s formula does not work anymore. In other words, it does not work precisely where the effects it describes are largest, where it is needed the most.’

In Pauling’s original formula, top, the dissociation energy of a chemical bond is DAB. It is the sum of the covalent and ionic parts of the dissociation energy, where the ionic part is the square of the electronegativity difference between the atoms in the bond, ΔXAB. In Oganov and Tantardini’s formula, bottom, the square of the electronegativity difference shifts from equating to the ionic part of a bond’s energy to representing the ratio of the ionic and covalent parts

In Pauling’s equation, the energy of a chemical bond is a sum of a covalent term and ionic term. The ionic term is the square of the difference between the electronegativity of the bonded atoms. This is the simplest possible formula, but has obvious problems. For example, when comparing lithium fluoride and caesium fluoride, there is a shorter and stronger bond between lithium and fluorine. This means that the covalent and ionic terms are larger for lithium fluoride than for caesium fluoride. ‘According to Pauling’s formula one should conclude that caesium is more electronegative than lithium, which contradicts chemical intuition,’ says Oganov.

Other researchers sought to fix this, using more complex formulae, with reasonable success. However, Oganov says that formulae for obtaining electronegativities from bond energies were still incompatible with formulae for getting bond energies from electronegativities. He and Tantardini, therefore ‘proposed the simplest possible formula eliminating these problems’, he says. They changed the equation so that the square of the electronegativity difference no longer directly equates to the ionic part of a bond’s energy. Now, it represents the ratio of ionic and covalent parts.

‘This in fact is more consistent with Pauling’s original view of stabilisation of the bond due to resonance of ionic and covalent wavefunctions,’ says Oganov. It also has the added benefit that the resulting electronegativities are not quantified by any units of measurement, whereas Pauling’s formula has the strange units of eV−1/2.

Pedro Salvador from the University of Girona, Spain, notes that Pauling derived his equation from experimental data rather than an underlying physical model. He says that the new equation is therefore ‘legitimate’, as well as better performing. However, he adds that computational chemistry today predicts reaction energies with high accuracy without electronegativity. ‘It would have made a more significant impact back in Pauling’s days,’ Salvador says.

Overall scientists have responded positively to the new formula, says Oganov. He adds that Pauling’s intuitive idea of electronegativity is still ‘extremely helpful’. ‘He was indeed a genius and his idea is not destroyed, but modified and reinforced, by our work,’ Oganov says.