The periodic table may be the most iconic way of ordering the elements, but it is not necessarily the most useful. Elements may sit side by side that have little chemical similarity, and even the columns don’t always reflect the closest affinities – carbon and lead, for instance. Two scientists in Moscow now propose a new way of arranging the elements in a single linear sequence with the smallest change in properties between each successive pair.1 Using this scheme, they say it will be possible to predict which simple compounds will have similar characteristics, helping to identify new candidate materials with useful properties such as hardness or magnetic behaviour. 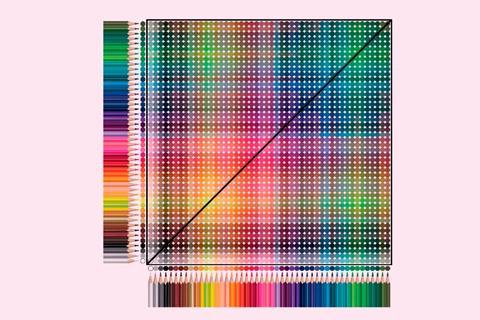 An ordering of this sort is not new. In 1984 theoretical chemist David Pettifor of Imperial College in London used empirical data for simple binary compounds to derive a scale for the elements.2 The sequential position in the sequence is called an element’s Mendeleev number (MN). In a two-dimensional plot with the MNs on each axis, the chemical space of binary compounds is arranged into regions where the compounds share properties.

Several other schemes have been proposed since, which define MN-type rankings based on, for example, the number of valence electrons3 or crystal structures.4 These approaches rely, however, on empirical definitions and therefore depend on which data are available and under which conditions they were measured. Zahed Allahyari and Artem Oganov of the Skolkovo Institute of Science and Technology in Moscow say that it would be better to define MN in terms of fundamental properties of the elements, which should then be possible to calculate for all elements at all conditions.

‘All previous MN schemes were empirical,’ says Oganov, and so become less reliable for data outside the set used to calculate them. ‘Our MN is non-empirical and should work equally well for any kind of data.’

The most important chemical properties of an element, the two researchers say, are the atomic radius, valence, electronegativity and polarisability. The last two factors, however, are strongly correlated, so just one will suffice. And because the valence of a given element can sometimes vary, it is ambiguous. They choose a MN based solely on radius (R) and electronegativity (χ), as given by the scale introduced by Linus Pauling. An element’s atomic radius may also vary in different compounds, but for their R values Allahyari and Oganov use half the interatomic distance in the simple cubic structure of the element. These two quantities are loosely correlated too, giving a linear regression. The researchers define their MN, which they call the universal sequence of elements (Use) index, from the order in which the elements in a plot of χ against R project onto the regression line. 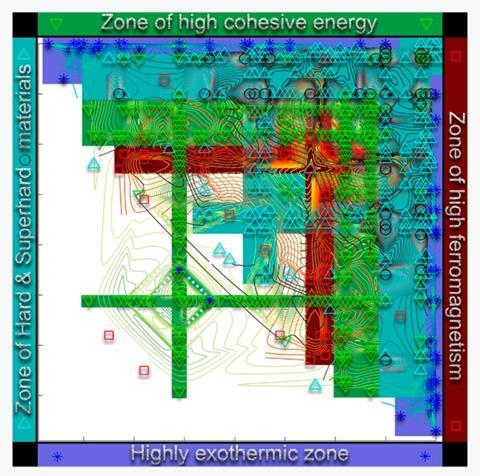 To assess how well their definition works compared with previous MN-type measures, they collected crystal-structure information for 1591 binary compounds and for 80 of the pure elements, as well as information on their enthalpy, atomisation energy, hardness and magnetisation. Materials with comparable characteristics will form clusters or islands in the two-dimensional space of binary compounds for each of these properties. To find new materials that might behave similarly to a known one, it would then be sufficient to explore others within the same island.

‘These clusters indicate chemistries that are worth exploring,’ says Oganov. ‘You can devise a computational strategy that first discovers the clusters and then zooms into them to discover the best material.’ The more efficient a definition of MN is, the fewer the number of islands there are. To assess this, Allahyari and Oganov use an algorithm for detecting clusters. They find that the Use numbers perform well in this respect, compared with the others, for each of these compound properties, and is the best overall.

Santiago Alvarez, an inorganic chemist at the University of Barcelona in Spain, says that approaches like this ‘could be useful for material discovery, because they enormously reduce the portion of the chemical space to be explored’. He cautions that the current restriction to binary compounds is a serious limitation. But Oganov says the approach will also work for ternary or more complex systems, although the resulting spaces would be multidimensional and so it would be hard to visualise the results.

There is always a risk that collapsing all relevant chemical features of an element into a single number will lose some information, says Guillermo Restrepo of the Max Planck Institute for Mathematics in the Sciences in Leipzig, Germany, who has explored other schemes for classifying elements. But the periodic table imposes such a ranking too, by atomic number, he says – and that’s surely not perfect either.

But Restrepo says it remains to be seen which ordering scheme – if any – is the best to use. It may be that a simple linear sequence that assigns each element only two neighbours will miss some of the interesting relationships. ‘An element may be most similar to more than one element, or several elements could be similar to a single element,’ says Restrepo.

The approach might also help to resolve longstanding arguments about the structure of the periodic table itself – such as where to put hydrogen. ‘From the viewpoint of MNs, hydrogen is closer to the halogens, rather than alkalis,’ says Oganov.

‘All these works contribute to a better understanding of the complexities of chemistry,’ says Restrepo. ‘Chemistry is so complex that we have not been able to reduce its complexity to a single property. Not even the so-called periodic law is general – only a handful of properties actually vary periodically with the atomic weight or the atomic number.’

‘But it does not mean that there is no such fundamental chemical property,’ he adds. ‘Perhaps it has always been there, waiting to be discovered.’ It would be great if several of these schemes converged on a single key parameter. ‘If this were the case, we would discover a fundamental property of chemistry,’ Restrepo says. ‘If this property turned out to be electronegativity, great! It would confirm Pauling’s genius.’

Correction: The story was updated on 20 November 2020 to clarify the use of the term Mendeleev number