2D materials have been grown inside living cells that would be impossible to get cells to take up any other way. The approach could be useful for bioimaging, diagnostic and therapeutic platforms. 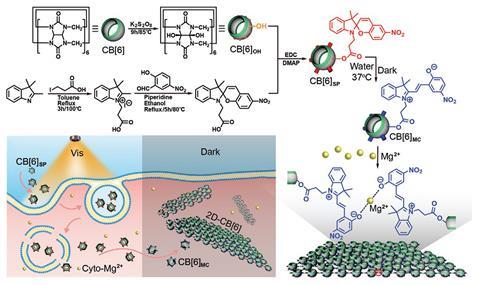 Synthesis of a cucurbit6uril with peripheral multiple spiropyrans (top), and their polymerisation into a 2D sheet. The light-mediated in situ generation of 2D sheets of the cucurbit6uril polymer inside living cells (inset)

Previous research has shown that 2D materials can be readily ingested by cells, offering promise for biomedical applications. Larger materials are desirable because they can remain in cells for longer to perform their designated role. However, researchers have been restricted because cells can only swallow – via a process called endocytosis – small 2D materials less than 200nm in size and they can be easily expelled.

Seeking a solution, Yi Chen and his colleagues at Sichuan University, China, have circumvented the size-limit imposed by endocytosis. Rather than trying to get cells to ingest fully formed 2D materials, the researchers instead devised a method to grow them inside cells from smaller building blocks that cells could readily take up.

For the building blocks, the team turned to a cyclical pumpkin-shaped molecule called cucurbit6uril, which is non-toxic and polymerises into 2D sheets. Chen says the biggest challenge was confining polymerisation of the monomers, and hence formation of the 2D materials, to exclusively inside the cells.

The 2D material was made using monomers of cucurbit6uril

To achieve this, the researchers engineered the monomers with covalently-attached light-sensitive pendant molecules called spyropyrans. When the building blocks were incubated with living cells under visible light, they were taken in by the cells and released into the cytosol – the liquid matrix of the cell. Then, by switching to total darkness, the growth of the 2D material was triggered.

It works because in the dark non-ionic spyropyran turns into ionic merocyanine, which reacts with cellular magnesium ions to form bridges between the cucurbituril-based building blocks, effectively polymerising them into single monomer thick 2D sheets. Results revealed that the materials grew to between 0.8 and 1.2µm in size, exceeding the size limit of cellular endocytosis.

‘It’s a very nice piece of work,’ says Pascal Jonkheijm, who investigates biomolecular engineering at the University of Twente in the Netherlands. ‘It is not with much imagination that the surface of these 2D platforms can now be readily tailored to carry contrast agents or therapeutics by simple mixing in the desired monomers.’

As a proof-of-principal demonstration, the team devised an assay using Förster resonance energy transfer, which involved giving the monomers fluorescent tags before introducing them to cells. This enabled the polymerisation dynamics to be visualised in living cells in real-time, showing how the materials might be employed for imaging purposes and also confirming that the 2D materials were indeed generated in situ.

Chen says that subsequent work has shown that the materials persist in cells, making them good candidates for biomedical applications. However, ‘the monomers in their present form cannot discriminate cell types yet, and thus their translocation and intracellular polymerisation impact all cells they are co-incubated with’, he adds. ‘Our group is now working to enable these monomers to accumulate in a target cell selectively for an intended use.’