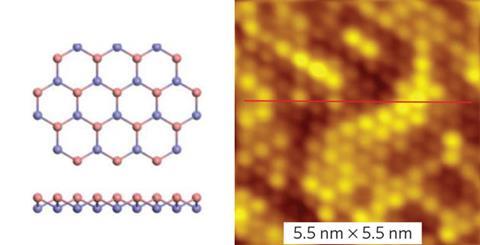 The onward march of new two-dimensional materials continues: researchers from China and the US have reported the first successful fabrication of an atom thick layer of tin – stanene. The finding is significant because two-dimensional tin has been predicted to exhibit a range of unusual electronic phenomena, such as topological insulation, where electrons can travel freely along the edges of the material without encountering obstacles such as other electrons or atoms, resulting in no dissipation of energy through heat.

A key to the success of the new work was to identify a suitable substrate upon which to condense highly purified tin atoms by molecular beam epitaxy under tightly controlled conditions. The researchers found that bismuth telluride (Bi2Te3) fitted the bill as a substrate. ‘Stanene has a hexagonal lattice, so the surface of the substrate must also have a hexagonal lattice,’ says Jia. ‘The lattice mismatch between the substrate and the stanene should be small and it should be energetically favourable to stanene to grow in a quasi-two-dimensional growth mode on the substrate.’

Having created what they are convinced is stanene, the team says that the next task will be to carry out electronic transport measurements to explore the potentially unusual quantum properties that have been predicted for the material.

Commenting on the study, Neil Wilson, who works on two-dimensional materials at the University of Warwick in the UK, says: ‘This is a crucial first step in exploring the properties of this new material, but there are still significant challenges. Here the growth substrate interacts strongly with the stanene, fundamentally changing its properties. It will be necessary to isolate the stanene from the growth substrate in order to test its intrinsic properties against the theoretical predictions. Applications will then require integration of the stanene with other materials, without losing its intrinsic properties.’

Correction: On 10 August the story was updated to include the correct formula for bismuth telluride