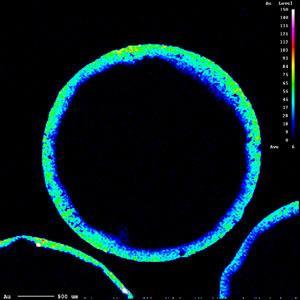 A gold-based catalyst over 30 years in the making is set to help fight the harm China’s polyvinyl chloride (PVC) plastic industry is causing the country’s environment. The technology’s development was originally initiated in 1982 by Graham Hutchings, now at Cardiff University, UK, to replace a toxic mercury compound used in making vinyl chloride monomer (VCM). Having established a production unit in Shanghai in 2015, UK catalyst vendor Johnson Matthey is ‘in advanced negotiations’ to supply the gold material into commercial operations. This eventual realisation of Hutchings’ idea to cut mercury pollution shows ‘you should never give up hope,’ he tells Chemistry World.

The current importance of Hutchings’ 1980s research comes because the industry turning VCM into PVC in China needs to clean up its act. China is both the world’s largest PVC producer and consumer, with demand driven by construction products such as pipes and conduits. In most other countries VCM is made by reacting ethylene (derived from oil or natural gas) with oxygen and chlorine. However, China’s industry exploits the country’s vast coal resources, turning coal into calcium carbide and from there acetylene. Producers then get VCM by reacting acetylene and hydrogen chloride gas using a mercury (II) chloride catalyst supported on activated carbon.

The coal-based process has major drawbacks, including needing a lot of mercury (II) chloride, around 10% of the total supported catalyst weight. This mercury salt is toxic and volatile at VCM production temperatures, meaning that it escapes into the surrounding environment, with the loss of catalyst slowing production. Catalyst production also generates significant mercury emissions.

Mercury can also pollute in other ways. For example, at a plant in Qiqihar mercury-contaminated waste slurry has flooded nearby farmland, as documented by the International Persistent Organic Pollutants Elimination Network (IPEN). ‘The Qiqihar example appears to be quite typical,’ says Joseph DiGangi, IPEN’s senior science and technical advisor.

Moving away from mercury will soon be mandatory because the Minamata Convention on Mercury, a binding international treaty signed in 2013, contains a specific clause on VCM. After 2017, it prevents new VCM plants using mercury catalysts. After 2022, all VCM plants must go mercury-free, providing there is an economical, available alternative.

Hutchings was originally tasked with improving the mercury-catalysed process by his then employer, African Explosives and Chemical Industries (AECI) in South Africa. ‘I went to the library and read a paper that had a lot of data in it and I used that data to predict that gold would be the best catalyst,’ he recalls.1 He was able to confirm that prediction at AECI, before moving to the University of the Witwatersrand. ‘I then had a PhD student, and we did a lot of work on this reaction, which we published in a series of papers in the early 1990s. And there it would have stayed, I think, had Johnson Matthey not got very interested in it around 2007.’

Together, Hutchings and Johnson Matthey researchers found that gold complexes with sulfur-containing ligands were stable enough to be dissolved in water, enabling a far cheaper process.2 Using just 0.6% gold by weight, the resulting catalysts could also achieve higher conversion rates, and remained stable for longer. ‘Gold is more expensive than mercury, so we needed to reduce the gold content and achieve a much longer lifetime so that clients have to change catalyst less frequently,’ van Haandel observes. ‘This lasts at least four times longer than the standard mercury catalyst,’ Hutchings adds.

That’s important, given that DiGangi notes that cost analysis would be ‘a key component in the rate of adoption’, and would unfortunately also exclude environmental and health costs. He adds that while it’s likely that ‘central government in China is quite interested in alternative catalysts, the situation throughout the country is harder to gauge’.

Other companies are also researching mercury-free catalysts. For example, Inovyn – a joint venture between Ineos and Solvay – is developing systems based on ionic liquids and noble metals, although they’re not yet on the market. ‘They’re very elegant and it’s definitely a nice idea,’ says Hutchings, ‘but well dispersed gold supported on carbon is far simpler.’

By contrast Johnson Matthey started marketing its catalyst, called Pricat MFC, in early 2015 after testing it ‘with one of the largest PVC producers in China’ from 2011–2014, van Haandel says. The Shanghai facility started up in mid-2015 and is ready to directly replace the mercury catalyst. ‘There’s a lot of interest,’ van Haandel adds. ‘This industry is very well aware that something is going to change and they have to do something. The big players are all getting ready. They’re either trying to do it themselves, or talking to us.’