A crucial increase in atmospheric oxygen that occurred around 2.4 billion years ago could have been triggered by a shortage of nickel in the oceans, according to Canadian researchers.

This ’nickel famine’ would have starved colonies of ancient bacteria that used nickel-based enzymes to produce methane. As a result, oxygen was able to build up in the atmosphere - giving rise to the environment we have today.

It is well understood that a ’Great Oxidation Event’ occurred 2.4 billion years ago that flooded the atmosphere with oxygen, but details surrounding what caused this event are unclear. Now, researchers at the University of Alberta, Canada, believe they have the answer after analysing sedimentary rocks obtained from all over the world, including Greenland, South Africa and Australia.

The rocks, called banded iron formations, were formed by slowly precipitating from seawater over billions of years. By examining the individual layers, the concentrations of trace metals in the ancient ocean can be revealed, stretching back nearly four billion years. 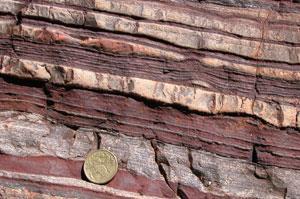 Banded iron formations, such as this one in Western Australia, precipitated out of the Earth’s early oceans billions of years ago, and are providing new clues to the evolution of ancient seawater and the microbes that inhabited it

’Our findings indicate that the early Earth was much more nickel-rich because of the style of higher-temperature volcanism at that time,’ says Kurt Konhauser, the lead researcher. ’As the mantle became cooler, around 2.5 billion years ago, the volcanic rocks became less nickel-rich, so less of the metal was being supplied to the oceans by their weathering.’

The team’s calculations estimate that nickel concentrations in the ocean fell by half during this cooling period - dropping from 400 nanoMolar (nM) to only 200nM. The process has continued ever since, leading to modern day concentrations of only around 10nM.

’Such a drop in availability would have had profound consequences for bacteria that depended on nickel,’ Konhauser explains. ’Crucially, these bacteria are implicated in controlling oxygen levels on the ancient Earth because the methane they produced was reactive with oxygen and prevented oxygen from accumulating in the atmosphere.’

Ariel Anbar, an expert on Earth evolution at Arizona State University in Phoenix, US, thinks that this is a elegant hypothesis. ’The idea that large-scale biogeochemical cycles can be perturbed by changes in the ocean availability of key nutrient metals has been proposed before,’ he told Chemistry World. ’This is the latest such idea to emerge, and is perhaps the most intriguing so far.’