Researchers in the UK have used a combination of solid-state and solution NMR to gain insight into metal–organic framework (MOF) formation for the first time.1 The technique can be applied to virtually any MOF, potentially providing a better understanding of how MOFs are formed more generally.

MOFs are porous materials, composed of metals and organic linkers, with a huge variety of potential applications. Recently, research has moved on from synthesising new MOFs to chronicling their nucleation and growth mechanisms, which can have huge implications for the final product. Solid-state NMR has emerged as a valuable tool for understanding MOFs, however, to date these studies have all focused on the finished product. ‘Most of the mechanistic insight is by inference – what happened is inferred from the properties of the product. We are interested in what happened before that, during the black box of the synthesis itself,’ explains Timothy Easun, who jointly led the study with Kenneth Harris, both of Cardiff University. 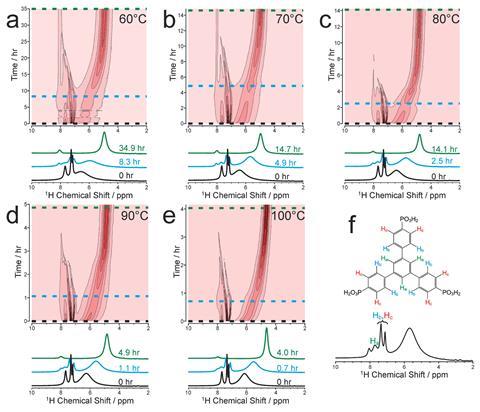 Importantly, this technique revealed information on the early-stage processes in the liquid phase, which is not typically available using x-ray scattering techniques. The researchers found that the organic linkers firstly aggregate, before complexation with the metal starts, resulting in cylinders or stacks of ligands surrounded by metal ions. These grow longer and longer, aggregating until they are large enough to act as a nucleation site for crystallisation. The team were also able to extrapolate quantitative kinetic data like the activation energy for the nucleation of MFM-500(Ni), a promising proton-conducting framework.

There are some limitations with the strategy, for example, there is a small window of time where the ligands are no longer tumbling freely in solution but are also not yet large enough to show up on the solid state measurements. This blind spot can be overcome using complementary small angle x-ray scattering (Saxs) measurements, to reveal more information on particle shape and size at the nanoscale.

While this first example was deliberately carried out on a relatively simple MOF, the implications may be much broader. MOF and crystal growth expert Guillermo Mínguez Espallargas from the University of Valencia in Spain says ‘I think the technique has a great future with many applications, and can be used to study lots of different MOFs, perhaps more complex examples like defective MOFs and provide more information on the role of templates in MOF formation.’ This ratcheting up of complexity is exactly what the team intend to explore. Easun is particularly interested in photochemically-active MOFs where the ligands can be in more than one state during synthesis, depending on light irradiation. For these more complex examples, gaining a better understanding of what is happening can allow greater control of the outcome and even shed light on failed syntheses.