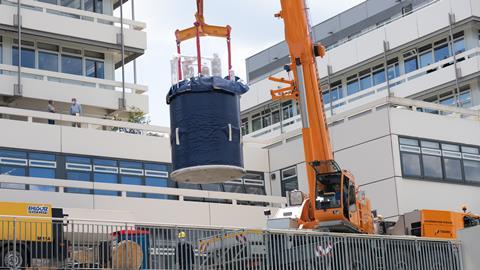 UK reaches the gigahertz NMR level – behind other nations

The University of Warwick has received the UK’s first NMR machine capable of generating 1H frequencies in the 1GHz range – but this still lags behind other top research nations’ capabilities. The instrument was delivered on 10 October, and is now being installed and ‘brought to field’ by US firm Bruker. 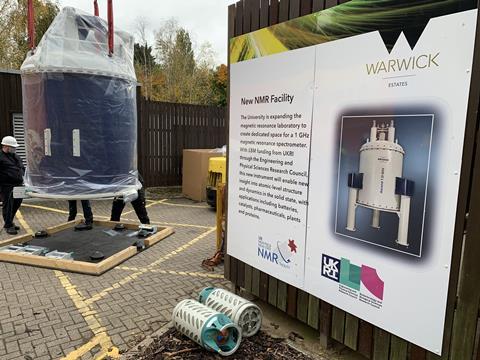 Later this year Bruker will bring a second 1GHz instrument to field at the University of Birmingham, explains Warwick’s Steven Brown. Together the instruments will allow researchers to study the structures of molecules and materials in higher resolution than ever before. ‘The Birmingham instrument will focus on biomolecular solution-state NMR while the Warwick one is focused on solid-state NMR applications,’ Brown tells Chemistry World. This investment by the funding council UK Research and Innovation in 1GHz technology ‘is welcome, but the UK is still playing catch-up’, Brown adds.

Bruker installed its first 1.2GHz instrument at the University of Florence, Italy, in May 2020. This was followed by 1.2GHz machines at the Swiss Federal Institute of Technology, ETH Zurich, and the Max Planck Institute (MPI) for Biophysical Chemistry in Göttingen, Germany. The machines use new superconducting materials to generate 28.2T magnetic fields, almost 600,000 times stronger than the Earth´s magnetic field, to align the spins of atomic nuclei. ‘We are very proud that we have brought a completely new technology to the NMR community,’ says Patrick Wikus, business line director for high-field NMR at Bruker Biospin.

The UK has not yet agreed to fund a 1.2GHz spectrometer, while several other European countries did so five years ago or more, observes the University of Oxford’s Christina Redfield. Among them, Switzerland, Italy, France and the Netherlands have each funded one 1.2GHz spectrometer and Germany has funded five. This is despite a 2017 report from the UK’s research councils noting that the life and physical sciences communities ‘pointed to’ investment in a facility exceeding 1GHz.

‘One difficulty in 2017, when EPSRC announced substantial funding of £20 million for very- and ultra-high field NMR, was the long waiting list for the 1.2GHz spectrometers, which were still under development by Bruker,’ says Redfield. The UK funding bodies wanted to strike a balance between funding and delivery of the instrument within the usual three-year grant period, and this wouldn’t have been guaranteed in 2017, she adds.

‘The recent installation of 1.2GHz systems in Italy, Switzerland and Germany is great news,’ continues Redfield. ‘The UK NMR community is hopeful that funding for a 1.2GHz system in the UK will now be possible.’ Redfield studies proteins using a 950MHz NMR instrument at Oxford, one of three in the UK. That machine was installed in 2005, having a 22.3T magnet made by Oxford Instruments, which stopped marketing high field NMR magnets over 10 years ago. That leaves Bruker as the only company selling 1.2GHz machines – Japan’s JEOL is the only other firm to have supplied an instrument exceeding 1GHz.

When the UK placed its order for the 1GHz machines, Bruker hadn’t yet produced a magnetic field using an HTS system, Wikus explains. However, the order for the University of Florence 1.2 GHz instrument was placed in 2010, despite the technological risk that it might not be possible to make it. ‘Every other big NMR lab in the world wanted to get their order in just to secure the spot in the queue,’ Wikus adds. ‘We now have around 11 confirmed orders. The first four will be delivered in 2020, and the eighth by the end of 2021. So if you ordered now, you’ll probably get your system around 2022.’

In September 2019, Bruker delivered the first 1.1GHz machine, with a 25.9T magnet, to St Jude Children’s Research Hospital in Memphis, US. The instrument cost $10 million (£7.7 million) says Charalampos Kalodimos, whose team uses the instrument to study protein structure and function. It enabled the group to publish what Kalodimos says is the first structural insight into how a protein kinase involved in leukaemia and other cancers switches between active and inactive states.1 ‘This is a major breakthrough in the field of protein kinases that will enable a thorough mechanistic understanding of their operation and function,’ he tells Chemistry World. The team also studied the role of mutations, and how resistance to kinase inhibitor drugs works.

The 1.1GHz NMR machine ‘provides exceptional sensitivity that renders visible what has been invisible to date’, Kalodimos adds. For example, the St Jude researchers have detected previously undiscovered rare conformations of the kinase that are inactive and might help design new cancer drugs. They have also shown that NMR can determine high-resolution structures of large, dynamic complexes that can’t be determined by crystallography or cryogenic electron microscopy (cryo-EM). ‘One example is the structures of molecular chaperones in complex with unfolded proteins,’ Kalodimos says.

NMR enables biochemistry researchers to study molecules in solution, ‘which is more like their native environment’, adds Redfield. ‘In addition, NMR is especially useful for looking at intrinsically disordered regions of proteins or proteins that are entirely disordered,’ she says. ‘Often, proteins with regions of disorder can be difficult to crystallise or the disordered regions don’t give observable electron density in x-ray crystallography.’ Disorder leads to multiple conformations that can make single particle analysis using cryo-EM difficult, she adds. However, NMR is usually restricted to relatively small proteins, while x-ray diffraction and cryo-EM are not, Redfield continues. ‘In cryo-EM, there is a minimum size limit so proteins that are suitable for NMR are often not suitable for cryo-EM,’ she says.

Perhaps the best argument in favour of the new instruments is that sensitivity and resolution of NMR spectroscopy always increases exponentially with magnetic field strength. ‘It is expected that you will solve a complex problem with a 1.2GHz instrument that you could not solve with a 950MHz instrument,’ explains Christian Griesinger from the MPI for Biophysical Chemistry. The leap from 1GHz to 1.2GHz is the largest in decades, with a much lower price per megahertz than for going from 950MHz to 1GHz, he notes. The MPI 1.2GHz instrument cost €12.5 million (£11.3 million). 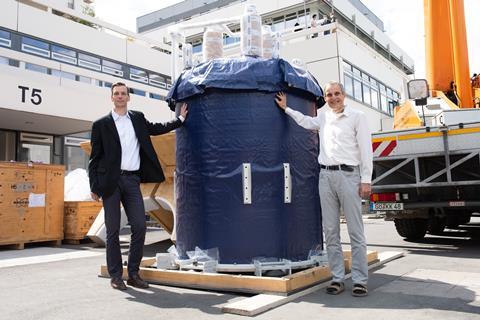 So far, researchers at the MPI for Biophysical Chemistry have only been able to work with the new instrument for two days. Then its magnet quenched, suddenly losing superconductivity and boiling off liquid helium due to heating. Bruker has approximately 230 high field magnets in use, says Wikus. ‘We know of approximately five spontaneous quenches over the past two decades, so this is a rare event,’ he says. ‘All we have to do is bring it back to field. It will work fine.’ This can happen with any magnet, comments MPI for Biophysical Chemistry’s Markus Zweckstetter. ‘What we can say already is that the sensitivity and resolution improvement has fully panned out,’ adds Zweckstetter’s colleague Loren Andreas.

In the UK, the first 1GHz instrument joins an 850MHz spectrometer at the National Research Facility in High-Field Solid-State NMR, which has been operational at Warwick since 2010. Brown notes that the significant sensitivity and resolution improvement offered are particularly important in solid-state NMR. Magic-angle spinning (MAS) techniques involving quadrupolar nuclei that constitute more than 75% of the NMR-active nuclei are hindered by broadening of peaks in the spectra the instruments produce. Higher magnetic field strength reduces this broadening, meaning that such experiments benefit even more from larger magnets than biochemical proton NMR research.

Many different applications can benefit from high frequency solid-state NMR, including catalysts, hydrogen storage, and batteries, where lithium-6 or lithium-7 atoms have quadrupolar nuclei. NMR of quadrupolar nuclei like nitrogen-14 or chlorine-35 can be used to study hydrogen- and halogen-bonding interactions in amorphous pharmaceutical dispersions. MAS also enables NMR crystallography, which can probe structural and dynamic disorder in ways potentially important for drug formulation.

The 1GHz instrument is part of a UK-wide community, ‘who see the value and importance in investing in the whole pyramid of solid-state NMR infrastructure’, says Brown. ‘There is strong interplay with research at lower fields,’ he explains. ‘Applications to the high-field solid-state national research facility usually rely on preliminary results obtained at lower magnetic fields.’

The future holds further advances in NMR frequency and field strength, suggests Griesinger. He refers to the 1.5GHz spectrometer with a 36T magnet at the US National Magnet Laboratory in Tallahassee. While less stable than 1.2GHz instruments ‘the researchers there have made big leaps in spectroscopy of quadrupolar nuclei’, he says. ‘As long as it is technically possible, the request of the NMR community to increase the field will be there,’ he says. When asked what that might enable, Griesinger recalls a story told by Richard Ernst, who won the Nobel prize for chemistry in 1991. ‘After his PhD in 1962, people told him NMR is dead,’ Griesinger says. ‘He continued and contributed many breakthroughs. Of course there will be cutting edge results.’

Correction: The story was updated on 28 September 2020 as the University of Birmingham’s 1GHz instrument has already been installed but will be brought to field later this year.