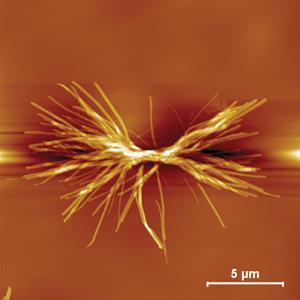 Resembling a bundle of cereal stalks, this atomic force microscopy (AFM) image depicts the first ionic organic nanocrystals to have a sheaf-like structure. Ursula Mazur, of Washington State University, US, and colleagues grew the p-conjugated molecules from two electroactive porphyrin synthons: tetra(4-aminophenyl)porphyrin and tetra(4-sulfonatophenyl)porphyrin. These building blocks assembled themselves into branched structures – the higher the reaction temperature the longer and more numerous their branches.

This new nanomaterial mimics the morphology of recently reported metal oxide semiconductors, like a-GaOOH and CuO, which extend in both axial and lateral directions to give distinct hyperbranched 3D structures with a high degree of connective complexity. Electroactive organic crystals, however, come with the prospect of their optical and electrical properties being tuned through careful molecular design. The crystals could therefore be harnessed to create efficient electron delivery systems for photovoltaics and energy storage devices.