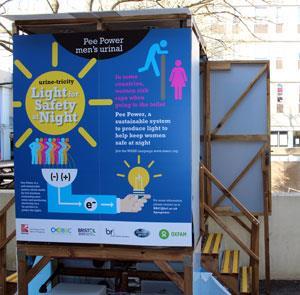 From the team that brought us the urine-powered mobile phone comes a new invention: a toilet cubicle whose lights are kept on by ‘pee power’.

The working prototype is currently situated at the University of the West of England in Bristol, UK, where it was developed by Ioannis Ieropoulos and colleagues. Like earlier examples of the technology, the system generates power from urine using a microbial fuel cell. The ‘fuel’ is collected via a urinal.

The team is hoping similar devices will one day prove useful within refugee camps, powering indoor lighting in toilet blocks to make them safer to use.

‘It is always a challenge to light inaccessible areas far from a power supply,’ said Andy Bastable, head of water and sanitation at the charity Oxfam, in a statement. ‘Living in a refugee camp is hard enough without the added threat of being assaulted in dark places at night. The potential of this invention is huge.’

The toilet’s creators are optimistic their invention could be deployed at relatively low cost. ‘One microbial fuel cell costs about £1 to make, and we think that a small unit like the demo we have mocked up for this experiment could cost as little as £600 to set up,’ Ieropoulos said.