Olympics doping lab to be re-purposed for phenome research

What do you do with a lab set up solely to catch Olympic drug cheats once the games are over? In the case of the London 2012 games, the answer is to turn it into a state of the art analytical lab. And this lab will be using the same equipment, currently being used to catch athletes abusing performance-enhancing substances, to probe people’s phenotypes – the interactions between genes and their environment. This will give researchers a much better idea of which risk factors are associated with illnesses like cardiovascular disease and cancer and could help to develop new therapies for them.

‘It is a first for the UK, there’s no question about it,’ says Jeremy Nicholson, a professor at Imperial College, London, who will be the new lab’s research director and principal investigator. ‘And the thing that really gives [the centre] traction is that it is dynamic – it has this ability to grow, that it has the big industrial R&D activity behind it. And that’s absolutely unique.’

The new Medical Research Centre (MRC) and the National Institute for Health Research (NIHR) Phenome Centre will be a new type of collaboration bringing together analytical and pharmaceutical firms and academia. It will take over the drug testing lab, currently housed at GlaxoSmithKline’s Harlow site, which is analysing athletes’ samples for the games. By the end of the Olympic and Paralympic games more than 6000 samples are expected to have passed through the lab’s doors. Each sample will have been checked for more than 240 different performance enhancing drugs, establishing the lab’s pedigree as a centre that can perform complex tests on large numbers of samples very quickly.

Wendy Ewart, deputy chief executive of the MRC, says that it is important to improve the UK’s capabilities so researchers can examine the phenotypes of patient groups. ‘The genome tells us about the genetics,’ she explains, ‘it gives you the alphabet, but doesn’t give you the language. This is a way of linking from the genetics to the disease pathway.’ She says that the new centre could be up and running by December and will act as a hub, giving researchers across the country the opportunity to probe the molecular basis of a wide range of diseases. 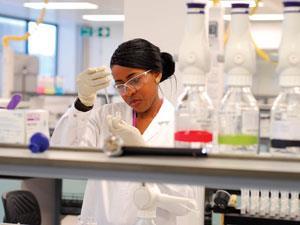 Instrument-makers Bruker Biospin and Waters will be supplying the analytical tools to probe the phenotypes of patient groups at the new lab. All in all, industry will make an in kind contribution to the centre of £20 million, while the MRC and NIHR will both provide £5 million for training and running costs.

‘The Olympics lab is entirely geared to targeted assays for drugs and drug-related substances  – naughty things – and we want to make it much broader,’ says Nicholson. ‘So the configuration of the equipment is not right for what we want.’ The Phenome Centre wants to maintain the high throughput and forensic level sample analysis that has characterised the Olympic anti-doping facility’s efforts, so will be carrying over a core of the lab’s instruments, including four GC-MS machines and 14 ultra high pressure liquid chromatography–mass spectrometers (UPLC-MS). On top of this, three 600MHz NMR spectrometers with sample jet robotics for high throughput screening will be installed. The centre has agreed a leasing deal with the instrument-makers that will see the UPLC-MS machines upgraded every couple of years to keep costs down.

Nicholson explains that NMR and UPLC-MS, including ion mobility UPLC-quadropole-time-of-flight-MS, will be used in an exploratory role – to seek out clusters of metabolites or unknown metabolites that might be linked to certain disease pathways. The centre will have a computational medicine group too, and this will help researchers to pick out which metabolites are significant and linked to an illness. On top of this, the lab will also have the capability to run targeted assays on metabolites such as bile acids, short chain fatty acids and steroids.

But the area that Nicholson is most excited about is making metabolic testing greener and smarter. ‘If you’re running 100,000 samples a year you could end up with a £1 million bill for just acetonitrile and it’s not a very green solvent,’ he says. ‘What we’re interested in is also exploring green chromatography and miniaturisation.’ This is something the firms involved with the centre are very interested in too. It is hoped that the work at the centre will feed into the development of the next generation of analytical equipment giving the businesses a return on their initial investment that would be exceptionally valuable.