Pipeline of US female chemists in doubt

The overall state and future prospects of female representation in US academic chemistry appears grim based on available demographic information, prominent speakers have warned at a diversity symposium held during the American Chemical Society’s (ACS) 251st annual meeting in San Diego, US. 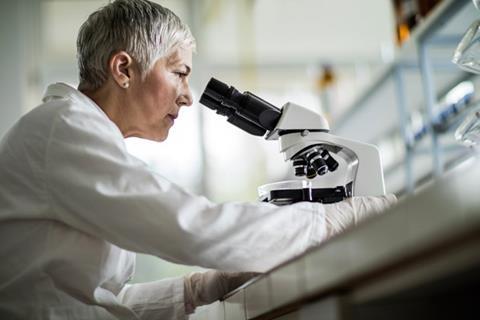 The rate at which major research universities are hiring female faculty members into their chemistry departments is growing by less than 1% per year, said Valerie Kuck, a past member of the ACS board of directors and career consultant to the organisation. Her estimate was based on ACS figures combined with data that she collected herself through website searches of nine elite research universities.

‘We have a long, long road ahead of us,’ stated Kuck, who was an adjunct professor in the chemistry department at both Seton Hall University and at the College of St. Elizabeth’s, in New Jersey, and retired from Bell Labs in 2001 after more than three decades with the company.

She referenced an estimate that at least 30% of faculty members need to be female in order to have an impact on a university’s culture and policies. ‘I don’t think that we are ever going to get there, because we have got these full professors that are going to retire, and we have very few replacements,’ Kuck said.

Although the average number of female full professors in the chemistry departments of these prestigious universities increased from 1.7 to 4.2 between 2001 and 2015, Kuck’s data showed that the figures for assistant and associate professors were worryingly low.

The average number of female associate professors in these institutions rose from 0.6 to 1 during that same period. The numbers at Caltech and Yale remained at zero, and at Princeton, the figure actually fell from three down to two.

‘This is where our future full professors are going to come from, and these pools are very small,’ Kuck said. ‘It is not a really happy picture, in fact the change is just negligible.’ She added that she knew a number of women included in the data will be retiring in the not-too-distant future. ‘There aren’t going to be women who are going up and getting promoted up to fill out the numbers,’ she warned.

The situation was not much better for female assistant professors of chemistry, where there was an average increase of only one female faculty member in the same fifteen-year period.

Rigoberto Hernandez, a chemistry professor at Georgia Tech who directs the Open Chemistry Collaborative in Diversity Equity (OXIDE), has also analysed the demographics of US academic chemistry departments and reached similar conclusions. ‘In the pipeline of women entering into academia and eventually becoming full professors, we have a significant loss at the associate professor level,’ he told delegates at the symposium. Former ACS executive director and CEO Madeline Jacobs also sounded the alarm. ‘The part that we are really concerned about … is the fact that we don’t have this pipeline of assistant and associate professors,’ she said.

Voting with their feet

A big reason why fewer women are entering academia is because it’s seen not as a very collegial atmosphere, according to Jacobs, who now serves as president and CEO of the Council of Scientific Society Presidents. ‘Women kind of are voting with their feet,’ she said, noting that they are not applying for these positions at these top-tier institutions. They may be applying for such positions at some of the four-year colleges or lowering-ranking universities, Jacobs suggested.

Interestingly, when Kuck compared the data from these nine elite institutions with data from the top fifty federally funded universities, she found that only at the rank of full professor did the nine do better in hiring and promoting women.

The environment in place for many years at some of these elite institutions, where there were only one or two women full professors on a faculty of 30 or 40, creates a situation where those women may stay, but their graduate students will not, Jacobs said.

‘There is a big problem in the elite universities,’ she continued. ‘You do see places where you have that critical mass, and it’s really a much better situation, but certainly at the top it is still a problem.’