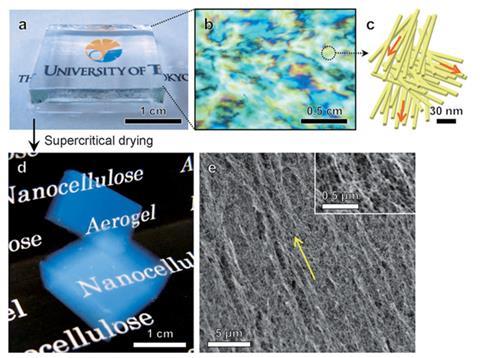 Japanese scientists have used nanocellulose fibres extracted from plants to create a new type of aerogel that is not only transparent and thermally insulating, but also mechanically tough.

Aerogels are ultralight materials, derived by replacing the liquid in a gel with gas. Most often made of silica or carbon, aerogels have a sponge-like structure consisting of randomly ordered nanoparticles and interconnecting pores. Known for their extremely low density, aerogels have outstanding thermal insulators, but their brittle nature can limit their uses.

In an effort to create a tougher aerogel, Tsuguyuki Saito and colleagues at the University of Tokyo have used a new building block – nanocellulose fibres. Produced by plants, these crystalline fibres have good elasticity, strength comparable to carbon nanotubes and a fairly homogeneous width of 3nm, thanks to their biosynthetic production.

By dispersing oxidised nanocellulose fibres in water the team created a hydrogel where individual nanocellulose fibres naturally assembled into a liquid crystal arrangement. After fixing the structure in place with acid, they replaced the water with ethanol, and subjected the resulting material to supercritical drying, leaving behind a nanocellulose aerogel.

In the hydrogel, a majority of the nanofibres were aligned in the same direction. As a result the final aerogel consists of a fairly homogeneous structure of three-dimensionally ordered fibres. ‘Compared with conventional aerogels, our aerogels are structurally new,’ says Saito.

On testing, the team found that their aerogel was significantly tougher than conventional silica or carbon aerogels. ‘When you press our aerogels – from 1cm to 1mm – they will not break,’ says Saito. ‘You can also fold and bend the compressed aerogel; conventional aerogels cannot do that.’ The team found they were also able to improve the aerogel’s toughness simply by increasing the density of the fibres in the initial hydrogel.

And while the nanocellulose aerogel is mechanically tough it still retains the transparent and thermally insulating properties of a conventional aerogel. ‘To my knowledge this is the first time that these three properties have been combined in one aerogel,’ Saito says.

Commenting on the work Stephen Eichhorn, an expert in cellulose materials at the University of Exeter, UK, says: ‘This is a truly remarkable aerogel material combining properties of high transparency, low thermal conduction and toughness. All these properties and also from a renewable material – cellulose… The challenge is now to manufacture this material in large quantities for bulk applications.’

The team now hope to use the technique to create new carbon aerogels with a similar structure and mechanical strength.