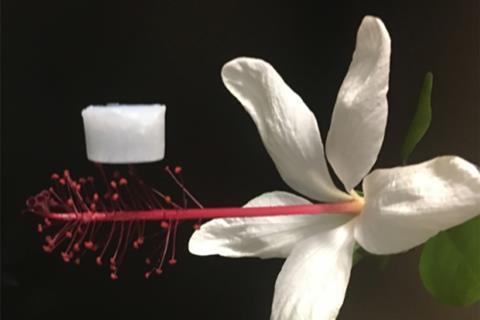 Although it’s only 1% as dense as water, a superinsulating material made out of boron nitride could protect spacecraft equipment from extreme heat or cold.1

Unlike other ceramic aerogels – solid dispersions containing more than 99% air – the material doesn’t become brittle under extreme conditions. It can be heated up to 1400°C for one week and withstand 500 temperature shocks that cool it from 900°C to –198°C in four seconds – all without losing its mechanical stability.

A team around Xiangfeng Duan and Yu Huang, from the University of California, Los Angeles, US, and Hui Li from the Harbin Institute of Technology in China designed the material using graphene’s hardier cousin, hexagonal boron nitride. Both are atomically thin and share a honeycomb structure, but boron nitride is chemically more resistant and doesn’t oxidise at high temperatures.

Duan’s team first created a template out of graphene with hyperbolic surfaces – saddle shapes with negative curvature. The template is coated with borazine, a boron–nitrogen version of benzene. Upon heating to 1500°C, the borazine first polymerises into polyborazylene, and then loses its hydrogen atoms to form crystalline boron nitride. Finally, the graphene template is oxidised and burned away.

This leaves a double-pane boron nitride structure, which, according to the researchers, suppresses air conduction and convection, making it superinsulating. It is only half as thermally conductive as a graphene aerogel. To test this, the researchers placed a fresh flower on top of a 2cm-thick aerogel sitting on top of a 500°C flame. After 15 minutes, they found that ‘the flower exhibited only slight withering’.

‘It’s very exciting that you can just use 2D materials to construct a 3D architecture – so it’s like a 2½D material,’ says Julia Greer from the California Institute of Technology, US, who recently created a superinsulator from nanosized hollow alumina beams.2 ‘It opens up a new area, where you can use 2D materials to create something that doesn’t have a periodic lattice.’

The aerogel’s hyperbolic design gives it unusual properties: it becomes thinner when squeezed and contracts when heated. It is also very elastic and recovers its full volume after being compressed by 95%; most ceramic aerogels can only recover compressions of up to 80%.

‘[The material’s] extreme compressibility coupled with the thermal stability and a negative thermal expansion coefficient is impressive,’ says Marcus Worsley who works on nanostructured materials at the Lawrence Livermore National Laboratory, US. ‘The major drawback for this material may be the scalability and cost of the synthesis route, which involves a graphene aerogel template and chemical vapour deposition.’

However, since the aerogel has only been tested under compression but not under tension, it’s likely to be too fragile for any applications, says Greer. ‘For space applications, it’d be great in terms of the weight and it’s possibly great in terms of the thermal conductivity, but its actual absolute strength is too low, it’s too weak,’ she explains. ‘It would be destroyed before the thing it’s trying to protect.’

‘Right now, we have good mechanical properties in one direction but not in the other two directions, because the structure is hyperbolic and intrinsically anisotropic,’ says Duan. ‘That’s something we need to work on.’