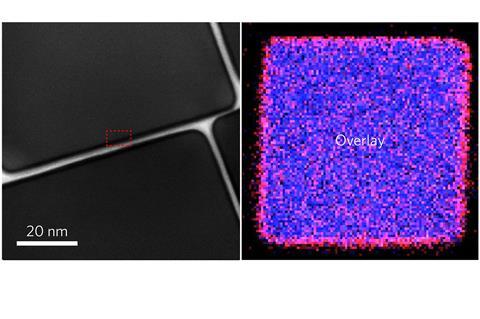 In recent years, interest has grown in plasmonic catalysts, which can use solar energy to drive chemical reactions. However, the best materials for absorbing photons are often ineffective catalysts. But now US researchers have produced nanoparticles comprising a plasmonic core that can absorb light, surrounded by a shell that acts as an effective catalyst. The researchers demonstrated the nanoparticles’ effectiveness in a reaction vital for fuel cells, and they believe similar nanoparticles could be effective for other reactions.

Traditional catalysts usually work by directing thermal energy through one vibrational mode into the weakening of a specific bond, lowering the activation energy of a desired reaction. This is not especially efficient, says Suljo Linic of the University of Michigan, Ann Arbor, because heat excites all vibrational modes of the catalyst, not just the necessary one. In plasmonic catalysis, materials absorb photons and, through the so-called plasmonic interaction, produce energetic electrons that can drive specific reactions. Unfortunately, metals such as silver and gold, which have very strong plasmonic interactions, are poor catalysts for many reactions. Conversely, more catalytically active metals such as platinum and palladium have weak plasmonic interactions with visible light.

In the presence of pure silver nanoparticles, the gas mixture had to be heated to over 200°C before the carbon monoxide was oxidised, and the selectivity for carbon monoxide was barely 10%. With illuminated platinum-coated nanoparticles, however, the photo-reaction occurred with around 70% selectivity at temperatures as low as 130°C. Linic emphasises, however, that their catalyst is unlikely to be used for this reaction as excellent industrial catalysts already exist.

‘I think it’s groundbreaking work,’ says Pedro Camargo of the University of Sao Paolo in Brazil. ‘It shows that we can marry a plasmonic metal with a catalytic metal and use the plasmonic metal to improve the catalytic properties of the catalytic metal. I think this will open up a lot more studies in this area and take plasmonic catalysis to another level.’ Prashant Jain of the University of Illinois at Urbana–Champaign praises the way the researchers ’very carefully set this up such that the functions of the two metals could be investigated separately’. He cautions, however, that ’industry is not well equipped and does not find economic feasibility in integrating light into these chemical processes, so applying this immediately or even in the foreseeable future is not something I see happening’.