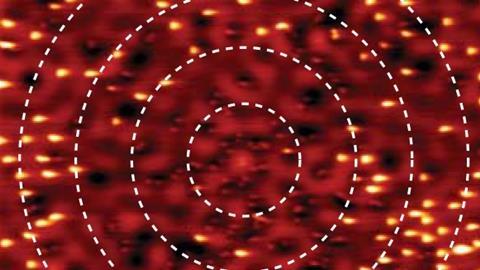 Plasmons’ ability to directly excite molecules and partake in a chemical reaction has been observed by researchers in Japan, South Korea and the US. The work provides fundamental insight into the underlying photochemistry and could aid the design of photocatalysts.

Localised surface plasmons are collective oscillations of materials’ free electron density. They can be triggered by photons, providing a route for energy from light to be channelled into chemical reactions. The precise mechanism by which this occurs, however, remains controversial. In the past decade, plasmons have been shown to catalyse the decomposition of oxygen and hydrogen molecules using macroscopic experiments and computational calculations. In both these cases, the researchers attributed the reactions to hot or high-energy electrons generated via the decay of the plasmons, producing transient negative ions. Whether plasmons could directly excite molecules, however, was unclear.

In the new research, Emiko Kazuma of Riken in Japan and colleagues used a scanning tunnelling microscope (STM) to examine plasmon-induced reactions. The researchers positioned the STM tip above the sample and observed dimethyl disulfide molecules on a metal substrate as elliptical protrusions. They then focused light of varying wavelengths onto the tip to stimulate plasmonic oscillations in the gap. 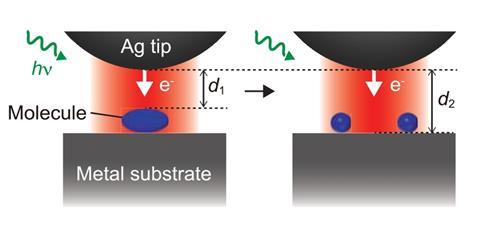 After allowing interaction between the plasmons and the molecules, the researchers found that some of the elliptical protrusions had become two adjacent ball-shaped protrusions, suggesting the central sulfur–sulfur bond in the molecules had dissociated. The researchers counted dissociated molecules and correlated it to the reaction time, the distance from the centre of the tip and the wavelength of the incident light. They also observed the single-molecule reaction in real time by using changes in tunnelling current to detect changes in the molecules under the tip.

The relationship they found was inconsistent with the hot electron mechanism. Instead, the researchers conclude plasmons were absorbed by the molecules, promoting direct electronic excitation into unoccupied molecular orbitals and causing the molecules to dissociate. This is similar to the photon dissociation mechanism if the tip is not present, but the plasmon enhances the efficiency by a factor of up to 400.

Although the researchers plan to check other reactions using their single-molecule sensitive STM method, they do not dispute previous claims advancing the hot-electron mechanism. ‘In previous study cases, we think that the hybridisation between the molecules and the metal surface is strong,’ explains Kazuma. ‘Our molecular system has weak hybridisation with the metals. This could promote a different reaction pathway.’ If the reaction pathway does indeed prove to depend on the degree of hybridisation with substrate orbitals, says Kazuma, this is something that could potentially be tuned to promote one mechanism or the other in a surface catalyst.

‘I think they did a really good job in nailing down the mechanism of plasmon-induced chemistry – something that’s been an important topic for a long time, where people have speculated about different mechanisms,’ says Frank Koppens of the Institute for Photonic Sciences in Spain. ‘The design of plasmonic chemistry now becomes possible, whereas before it was a bit of random luck.’

Volker Deckert of Jena University in Germany adds a note of caution: ‘The reaction takes place at 5K and ultra-low pressure, so definitely far away from any bulk synthesis conditions,’ he says. Nevertheless, he agrees the work is a valuable start. He says that ‘in chemistry, you’re always trying to make a new molecule’ so the next step would be to investigate a substitution or polymerisation reaction. ‘That you know the mechanisms to expect is, in my view, very important,’ he says.