Polish chemistry lecturer jailed for plot to blow up parliament

A Polish court has sentenced former chemistry lecturer Brunon Kwiecien to 13 years in prison. The 48-year-old former academic, who taught at the University of Agriculture in Krakow, plotted to detonate 4 tonnes of explosives in an armoured personnel carrier in close proximity of the Polish parliament in late 2012. 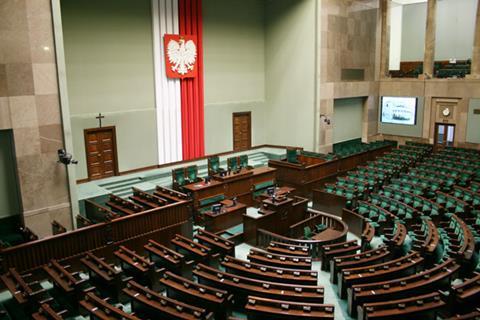 Kwiecien was found guilty of preparing a terrorist attack with the aim of assassinating Poland’s then president Bronislaw Komorowski, prime minister Donald Tusk and members of the country’s parliament. He was arrested by the security services in November 2012 after undercover agents contacted him and pretended to be sympathisers offering aid.

Kwiecien was sentenced for conspiring to commit a terrorist attack on the Polish government and parliament, engaging in illegal purchase and trade of weapons and attempting to recruit co-conspirators.

‘We have demanded a 13-year prison sentence, so we are not planning to appeal this decision,’ prosecutor Piotr Kosmaty, the spokesperson for the Appeal Prosecutor’s Office in Krakow, tells Chemistry World. ‘Since his arrest, we have demanded several times that his temporary detention is extended.’

Kwiecien claimed he was a victim of a provocation plotted by the security services. Kosmaty said that both the prosecutor’s office and Kwiecien’s lawyers were awaiting the release of a written judgment by the court which sentenced the former lecturer.

The chemist’s interest in explosive materials dates back to his youth. As a teenager, he lost several fingers on both hands as a result of an experiment gone wrong. Kwiecien graduated in chemical technology from Cracow University of Technology, and in 2000 he defended his PhD thesis in organic chemistry at the Organic Chemistry Institute of the Polish Academy of Sciences. He briefly worked at the Medical Biochemistry Institute of the Medical College of the Jagiellonian University in Krakow, after which he was appointed lecturer at the Institute of Chemistry and Physics of the University of Agriculture in Krakow where he taught until his arrest.

First-year students of the University of Agriculture who were taught organic chemistry by Kwiecien told local newspaper Gazeta Wyborcza that the former lecturer would often digress on Polish politics during classes, criticising Poland’s then ruling centre-right Civic Platform party. He frequently shared conspiracy theories with students, claiming, for instance, that a number of public figures who committed suicide were in fact assassinated. Kwiecien also expressed sympathy for a far-right Polish politician.

‘Every piece of evidence indicates that the defendant was thinking of such an attack, made preparations for it and the weakest element of the plan was the human factor. This is why he lectured students,’ Judge Aleksandra Almert said in her oral judgment, as reported by local news agency PAP. Kwiecien was unscrupulous in his attempt to use his position of a lecturer to reach out to his students and recruit potential co-conspirators among them, causing some students major distress, Almert said.