Post-synthesis shape changes can be driven by temperature

A polymer’s shape is crucial to its properties, but is usually considered an immutable feature of the molecule. But researchers have now developed polymers that can be converted into different molecular architectures by changing the temperature. They say the technology could have a range of potential uses, from drug delivery to self-healing materials.

The Diels-Alder reaction involves the combination of a diene with an alkene (dienophile) to form a six-membered ring. Two dienes that can bond to the dienophile maleimide are furan and anthracene: anthracene binds more strongly, but the activation energy required for the binding reaction is higher. Therefore, at moderate temperatures, maleimide mixed with furan and anthracene will first form furan-maleimide. Polymer chemist Brent Sumerlin of the University of Florida in Gainesville, US, estimates that its shelf life in this state would be ‘quite long’. When heated, however, the reaction mixture gains enough energy for the furan-maleimide to dissociate. The liberated maleimide then reacts with the anthracene – an essentially irreversible reaction.

Sumerlin and his colleagues used this mechanism to create polymers whose topologies changed with temperature. For example, the researchers added the polymer P(S58-co-CMS14-co-AnthMS13) – which contains anthracene groups attached to one side of the polymer chain – to the block copolymer PEG44-b-PMA19 – which is joined by a central furan-maleimide link – and refluxed the two at 120°C. When the anthracene displaced the furan, the block copolymer underwent ‘metamorphosis’ into the comb copolymer P(S58-co-CMS14-co-(AnthMS13-g-PMA19)). The team demonstrated several other metamorphoses between star, comb, hyperbranched and block copolymers. 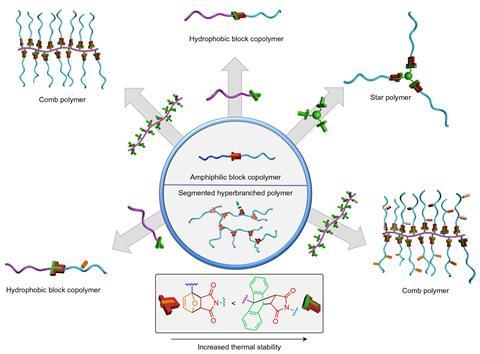 Sumerlin acknowledges the work is a proof of concept, but believes it could have useful applications. Polymers that undergo multiple topology changes, he speculates, could be useful in medicine. ‘Maybe [a polymer] would have one architecture that favours cell uptake, another architecture once it gets inside an endosome that favours disruption of that endosome and release of a therapeutic, and then maybe another architecture that would help it be removed from the cell,’ he says.

’This [work] is very interesting because it introduces a very simple and practical way to vary architecture after the polymer has been synthesised,’ says polymer chemist William Dichtel of Northwestern University in the US. He says the paper inspired him to think about other sets of reactions that could respond to stimuli such as pH. He concludes it is ‘early days’, but says that ‘these things tend to make their way into use once people have had a chance to think about the possibilities’.