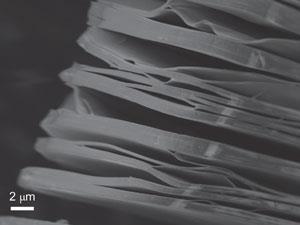 Individual polymer sheets can be chemically exfoliated from a stack

Crystal engineers have finally succeeded in achieving a goal that has eluded chemists for decades by unambiguously synthesising two-dimensional polymer crystals, confirmed by single-crystal x-ray diffraction. Two teams, from Switzerland and the US, have independently shown that anthracene-based monomers can be slotted together into monolayers that can then be fused into polymeric sheets, a single molecule thick, by the action of UV light. The stacked sheets can then be separated by exfoliation.

The finding opens the way to the creation of organic two-dimensional membrane polymers with more complex chemistry than graphene, and with potential applications ranging from optics and electronics to exquisitely selective molecular sieves.

Both groups used rotor-shaped molecules possessing three flat blades of anthracene. At Dieter Schlüter’s laboratory at ETH Zurich, the researchers used a ‘double decker’ triazene with three vertical anthracene blades as a monomer.1 Meanwhile, at the University of Nevada, Benjamin King’s team synthesised a Y-shaped monomer with three photoreactive tetrafluoroanthraceno blades.2 In both cases, the flat blades of the monomers stack with neighbours through p–p interactions to form crystals of monomer. Exposure to UV light leads to photopolymerisation of the monomers into stacked sheets of polymer. By using a solvent-based exfoliation process, the lamellae can be peeled off into layers containing variable numbers of sheets, including single leaves.

‘To create a 2D polymer is super-tricky, and whatever you do you need to create a large enough amount to carry out a thorough analysis and obtain nice data,’ says Max Kory of the Swiss team. ‘The big problem is how to limit reactivity to only two dimensions. You need a rigid structure and you have to have functionality. And whatever you make, you must be able to elucidate the structure.’

Intriguingly, the ETH team showed that the polymerisation of their two-dimensional crystals is reversible: if the crystal polymer is heated over a period of time it reverts to its monomeric form, and can then be re-polymerised upon exposure to UV radiation. This reversibility could be useful in patterning the sheets into regions of polymer and monomer to give the material different properties.

‘The aim is to design a molecule that is easy to make and might just pack in the right way in a crystal,’ King says. ‘We used as our principles precedent, intuition and luck, and the most important of these was luck.’

The US team’s monomer aligns itself with neighbours to form a flat network of hexagons, similar to a honeycomb. The holes in the network remain as voids, giving the membranes enormous porosity, which could lend itself to applications in molecular separation.

Both teams used UV light to photopolymerise the polymer sheets

‘The real trick was to maintain the crystal structure from monomer to polymer,’ King says. ‘A good crystal should look like a little gem, without any obvious flaws.’ When the team first exposed their monomer crystal to UV light, subsequent analysis showed that only dimerisation had occurred. ‘We then hit it a bit harder with UV and got the full polymerisation,’ says King. Throughout the process, the crystal retained its original appearance.

Both research teams used single crystal x-ray diffraction to unambiguously confirm the two-dimensional polymeric structure of the crystals, something that has not been achieved to date with other attempts to create such two-dimensional crystal polymers, marking a milestone in the field. ‘The characterisation is crucial,’ says Kory. ‘You need a bulletproof analysis.’

‘Importantly our system is highly scalable and with our monomer we can do the reaction in just three steps to produce gram quantities,’ notes Kory. ‘We are now collaborating with physical and electronic engineers to investigate the non-linear optical properties of these sheets.’ 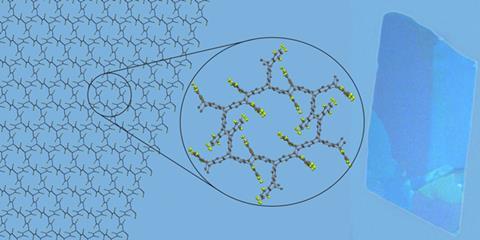 King says: ‘I hope this will spur more activity in the field and maybe get some of the materials scientists to move away from just looking at graphene and molybdenum sulfide.’

Other experts in the field recognise the importance of the studies. Joshua Goldberger of Ohio State University in the US says: ‘It is quite remarkable that crystalline 2D polymers can be prepared via the photo-topochemical polymerisation of self-assembled small molecules. The fact that both King's and Schlüter's teams show that this process works with two different materials systems proves that this is a viable process for creating beautiful, macroscopic 2D crystals, that are robust enough to exfoliate into layers.’ Goldberger adds: ‘Their work paves the way to rationally design and fine tune new families of 2D materials that could have great promise in catalysis, separations and selective ion conduction.’

William Dichtel of Cornell University in the US, comments: ‘These studies are a remarkable advance in that they characterise the photopolymerisation as a single-crystal to single-crystal transformation, validating this strategy for forming two-dimensional polymers.’ While in an accompanying commentary to the two studies,3Neil Champness of the University of Nottingham in the UK says that the findings illustrate ‘great potential for the preparation of two-dimensional materials’. He adds: ‘The future of these materials is undoubtedly bright and I have no doubt that this a field that will grow and grow.’