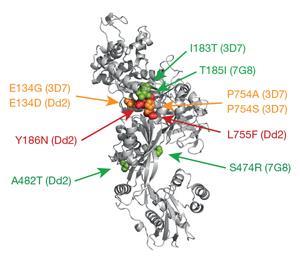 An international team of researchers has discovered a promising new class of antimalarial compounds that kills the parasites in a different way to current drugs. The researchers say the find could lead to a single dose cure or prevent someone from getting malaria in the first place for as little as $1 (£0.64) per treatment.

In 2013 there were an estimated 198 million cases of malaria worldwide and 584,000 people died from the disease, most of whom were children in sub-Saharan Africa. Many antimalarial drugs exist, but since malaria-causing Plasmodium parasites build up resistance to drugs over time, new compounds that target other parasite pathways are always sought.

Now, Ian Gilbert at the University of Dundee, UK and colleagues, working with the Medicines for Malaria Venture, have found a compound dubbed DDD107498 which kills Plasmodium falciparum – the species responsible for most dangerous form of malaria – by targeting a molecule that is essential for protein synthesis. ‘This is an exciting new compound. It works against multiple life-cycle stages and has the potential to be an important medicine in the battle against malaria,’ says Gilbert.

The promising compound was discovered by screening over 4700 compounds against malaria-causing parasites to see if any killed them. From this the team found a compound class based on a 2,6-disubstituted quinoline-4-carboxamide scaffold that was effective against the parasites, but had poor physicochemical properties. Nevertheless, this established a chemical starting point that enabled a team of chemists and biologists to optimise the compound’s properties through cycles of design, synthesis and testing until they reached DDD107498.

Experiments revealed that DDD107498 has good drug-like and pharmokinetic properties including metabolic stability, oral bioavailability, no toxicity and long plasma half-life, which is important for single-dose treatments. When given to malaria-infected mice DDD107498 worked with comparable or greater efficacy than current antimalarials.

‘The drug DDD107498 appears to have excellent pharmacological properties that would make it possible to devise a single dose cure for malaria, as well as to prevent malaria,’ says Akhil Vaidya, a malaria researcher at Drexel University College of Medicine, US. ‘It is also important that the drug works against various stages of the parasite, thereby making it possible to be used as a transmission blocking drug.’

‘At a very early stage, studies conducted against the parasite suggest that it has an acceptable risk towards resistance,’ Gilbert says. ‘However it is very difficult to know how quickly the compound would develop resistance in patients. Like all antimalarials, it would be given as a combination with another antimalarial drug. This would protect the compound against resistance.’

Vaidya adds that it would be important to carefully choose a partner drug for DDD107498, when it is ready to be deployed. ‘It appears that this drug is a relatively slow killer of the parasite, and thus combining it with a fast killer drug would be an approach to consider.’

Pharmaceutical company Merck Serono has now taken the compound on, which is currently undergoing late stage safety testing. According to Gilbert, if all goes well, it should go into human clinical trials in about a year. ‘It would then probably take another five or six years before it was a medicine available for patients,’ he adds.