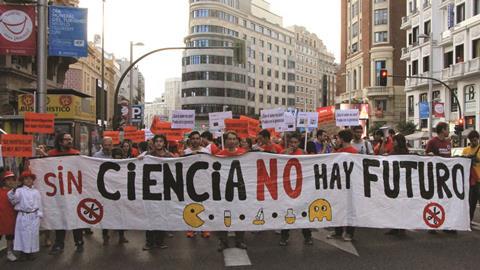 Researchers take to the streets of Madrid over worsening conditions

Three hundred people marched through central Madrid to protest cutbacks to Spanish science and research last Friday. The protest, which took place on European Researchers’ Night, gathered workers from across the sciences, including administrative and technical personnel as well as researchers.

Under the slogan ‘No science, no future’, the protesters shone a spotlight on some of the concerns that leading figures of the Spanish research community have voiced recently. These include the charge that Spanish science is underfunded, R&D is not being channelled to help the country’s economic recovery and that the government is favouring a service-oriented economy. The march was also supported by Maroon Tide, which works to bring Spanish emigrants back to country.

The country’s brain drain was one problem that worried protesters. Ernesto Nungesser, a mathematician and member of Maroon Tide, said that his group was supporting the march because it was ‘not only a question about scientists, but also a question about what kind of country we want’. He added that a country dependent on just tourism and construction offers no future – not only to researchers – but to many other sectors.

‘My daughter, who is a lab technician, is still here, but I’m worried that she will have to leave soon,’ said Beni, a protester who said she work in the sciences. She was angry that while Spain trained scientists, other nations benefitted from them when they left.

Coinciding with the march, Science for the People published the results of a survey on the health of the country’s science base. The poll questioned over 1200 researchers in Spain, which showed overwhelming discontent with science funding. The survey showed that Spanish researchers think their jobs are unstable and they are demanding a dedicated union.

David García Aristegui, a member of Science for the People, says that Spanish society has a very high opinion of science, but that the reality of working scientists is not well known. ‘A scientific career is now a veritable steeplechase, and people need to know that.’ García Arístegui denounced the precarious nature of researching jobs and growing inequality at research centres: ‘Only people with a huge economic cushion can plan now to write a thesis or build a scientific career’.

The survey backed García Aristegui’s claims. Less than half of the respondents have permanent contracts, and less than 15% say they have total ‘work stability’. The researchers blamed poor government decisions with 83% of respondents disagreeing that political action had benefitted the sector.