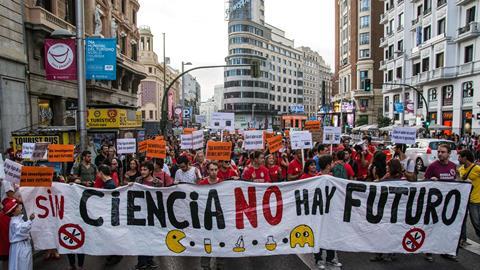 Back in 2015 the Spanish government made sweeping changes to the employment contracts of 10,000 pre-doctoral researchers, effectively turning them into internships without warning or consultation. Now, in response to a campaign headed by the Federation of Young Researchers and the campaign group Science With Future, they have promised to backtrack.

In a statement, the Ministry of Employment and Social Security confirmed that the original contract codes will be restored. They have also encouraged employers – in most cases the country’s universities – to make ‘all the relevant information about these changes’ available to researchers this time.

Researchers argued that their contracts being codified as internships could affect their working rights. For example, while classed as interns, pre-docs could not access the full coverage provided by the European Healthcare Card while working abroad as part of fellowships or doctoral programmes, and were only entitled to 90 days of coverage.

The full extent of any changes to the terms of employment was unclear. The largest labour union in Spain, CCOO, pointed out that if considered interns, it would be illegal for researchers to get another internship after their contracts were over. The union also said that, as interns, they wouldn’t receive any compensation if sacked. However, sources at the Ministry of Employment and Social Security told Chemistry World that the changes were purely administrative, and that the actual conditions of employment were not modified. The researchers themselves are not sure whether the change in the contract codes meant a loss of working rights. ‘We have asked many lawyers, but their opinions were not consistent,’ explains Javier Sánchez Perona, spokesman at Science With Future, adding that this had created ‘insecurity’ among the research community.

The government has claim the original contract changes were made at the request of the Council of Spanish University Chancellors (CRUE), although they were unaware of the underlying reasons. In February, the Council admitted to having made the request, but declined to comment further on the matter.

In a recent statement, CRUE said that it had asked the government to ‘temporarily’ suspend the changes in response to the ‘controversy and doubts’ created.