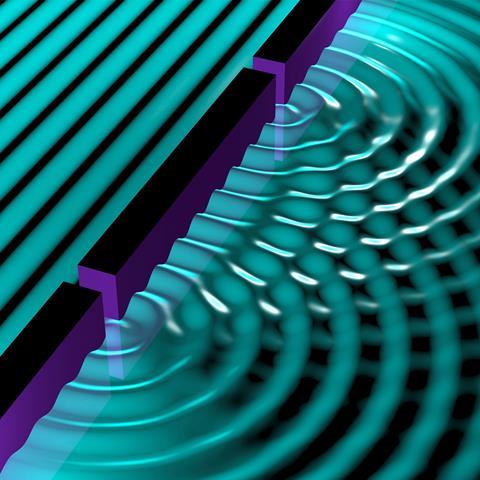 The iconic quantum double-slit experiment, which reveals how matter can behave like waves that displays interference and superposition, has for the first time been demonstrated with individual molecules as the slits.

Richard Feynman once said that the double-slit experiment reveals the central puzzles of quantum mechanics, putting us ‘up against the paradoxes and mysteries and peculiarities of nature’.

Richard Zare, Nandini Mukherjee and their co-workers at Stanford University, US, have now shown that when helium atoms collide with deuterium molecules (D2) in quantum superposition of states, the scattering can take two different paths that interfere with one another. The researchers reveal the interference by looking at its effects on the scattered D2 molecules, which lose rotational energy in the collision.

Zare and colleagues created an ultracold molecular beam of a mixture of D2 and helium in which collisions happen at an effective temperature of 1K (–272°C). Using two sets of polarised laser pulses, they coaxed the D2 molecules into a specific rotational and vibrational energy state but in two different orientations with respect to the laboratory frame of reference, at right angles to one another. These act as the two ‘slits’ that scatter the helium atoms. 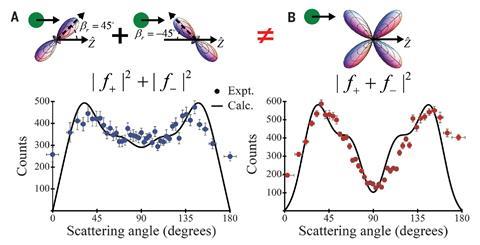 Only when the deuterium molecule is in a superposition of both orientations (right), the helium atoms scattering off it act as if they had passed through the double slits of the classic quantum experiment (red dots = experiment; black line = calculation)

Crucially, the researchers can also prepare the D2 molecules in a coherent superposition of both orientations – that is, with the wavefunctions of the two superposed states remaining in synchrony with one another. When helium atoms scatter off the superposed molecules, the atoms ‘feel’ both orientations at once.

The collisions cause the D2 molecules to fall back to the rotational ground state for this vibrational level, which Zare and colleagues then selectively ionise and analyse. The experimental measurements matched this prediction closely.

Physical chemist David Clary of the University of Oxford, UK, says that the work advances the understanding of how molecular scattering can switch molecules between different quantised rotational states. ‘It has long been a goal to build an experiment that can measure such transitions in all the initial and final quantum states,’ he says. The Stanford team has ‘made progress in this direction’ by using quantum interference to reveal the different rotational states, he adds.

Quantum interference effects in molecular scattering have been seen before. In one earlier experiment, interference was observed for photoelectrons emitted from an oxygen molecule because each electron could interact with either of the two atomic nuclei. But what makes their experiment different, says Mukherjee is that ‘we have full control of the “slits”’. They are not two atoms in a fixed relationship, as in a diatomic molecule, but are created by superposing the molecular orientations, and so can be adjusted at will – rather like altering the slit width or separation, or blocking one of them off.

Clary hopes that this approach might ultimately lead to the ‘holy grail’ of quantum control with an experiment where all the initial and final quantum states of the scattered molecules can be selected. Mukherjee says that the approach will also work for bimolecular gas-phase chemical reactions. In that case, she says, ‘you could control the product of reactive chemical collisions’ with quantum precision.

The researchers believe their results are also probing fundamental aspects of quantum behaviour. ‘We describe the preparation of a new type of matter: a molecule prepared in a coherent superposition of states with a known and controllable phase relating the superposed states,’ says Zare. They hope their method might be used to study decoherence, by which quantum phenomena turn into classical outcomes through interactions with the environment.