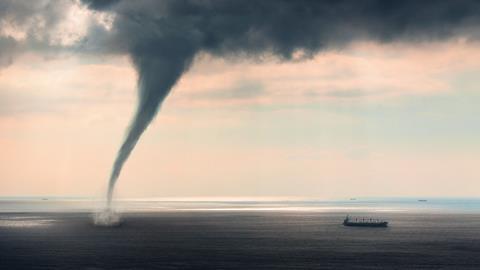 Researchers in Israel have created the first vortex beams made of atoms and molecules. The experiments, which manipulate atoms’ wave functions so they carry an orbital angular momentum, could offer insights into the fundamental properties of matter.

Vortices are characterised by some kind of circular flow around an axis. Whirlpools and tornadoes are among the most familiar examples, but vortices can occur down to the very smallest scale. In 1992, researchers showed that the movement of a single particle could be considered a vortex when they generated laser beams of spiralling photons.

Photon vortex beams have since found use in optical tweezers and quantum communication, while more recently electron vortex beams have been used to study chirality and magnetic effects. But, until now, nobody had been able to make a vortex beam using non-elementary particles like atoms, which are more complex due to their internal structure.

A team led by Edvardas Narevicius at the Weizmann Institute of Science in Tel Aviv has created the first beams of helium and neon atoms, as well as helium dimers, with intrinsic orbital angular momentum.

‘We describe [particles] by waves. And usually waves are very simple – they oscillate up, down, up, down,’ explains Narevicius. ‘This wave is a corkscrew, so it goes around the axis of propagation.’ The atoms’ wave functions were shaped by firing beams of helium at low temperatures through forked diffraction gratings. 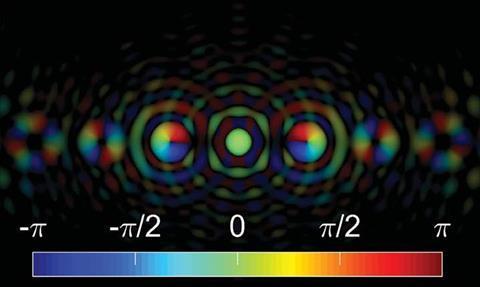 ‘The work is of great importance because it demonstrates the possibility to manipulate the wave function of a beam of complex microscopic objects such as individual atoms,’ comments Fabrizio Carbone who heads the laboratory for ultrafast microscopy and electron scattering at the Swiss Federal Institute of Technology. ‘While similar modulations of the transverse component of the wave function of atoms was previously achieved in the context of cold atoms research and Bose-Einstein condensates, a beam of atoms traveling in free space carrying orbital angular momentum has never been produced before.’

Carbone explains that being able to engineer atoms’ wave functions in this manner offers new possibilities for controlling their interactions with matter. ‘During any interaction, the orbital angular momentum carried by the atoms has to be conserved,’ he says. ‘This can have consequences for several applications based on atom–matter interactions such as radiotherapy, spectroscopy and beam-based nano-fabrications to name a few.’

‘Beyond this, at the fundamental level, the question of what happens to the interactions between the fundamental particles composing an atom belonging to a vortex beam does not have an answer yet.’ Carbone believes that answering this question could reveal interesting effects that could have consequences for molecular physics, nuclear physics and even high-energy radiation sources. 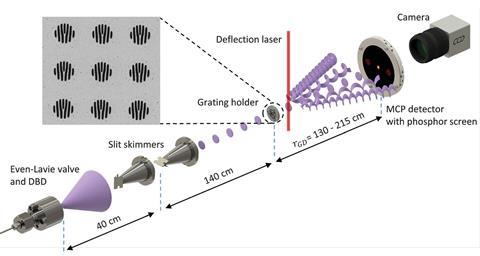 Like Carbone, Narevicius notes that the vortex beams could enable experiments that reveal insights into atoms’ internal structure. ‘How would you couple this new degree of freedom with internal motion? Until now, you really could not explore that question, because you only had vortex beams generated with electrons and photons – both elementary particles that have no internal structure,’ says Narevicius. ‘Now these questions cannot only be addressed in theory, but also in an experiment.’