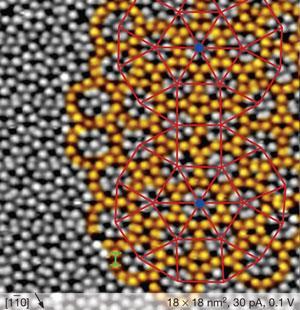 Scientists in Germany have discovered quasiperiodic crystals, or quasicrystals, in oxide materials. The discovery suggests there could be many more quasicrystals out there, despite only a few having been found to date.

Quasicrystals are structures that have the general ordering but not the exact periodicity of ordinary crystals. Put simply, if you made a copy of a crystal’s structure in one place and then overlaid it in another, the two structures would align perfectly; the same is not true for quasicrystals.

Since the Israeli materials scientist Dan Shechtman first discovered quasicrystals in the early 1980s – a feat that won him the 2011 Nobel chemistry prize – researchers have been trying to find more examples of them (see this video of Shechtman talking to Chemistry World). So far, the majority of quasicrystals have been found in carefully fabricated metal alloys, although in 2009 a natural mineral example was found in the Koryak mountains in Russia.

The latest example, discovered by physicist Wolf Widdra and colleagues at the Martin Luther University of Halle-Wittenberg in Germany, centres on perovskites, a class of compounds whose atoms are structured in an odd mix of cube and diamond shapes. Perovskites have been widely studied for potential applications in superconductivity, magnetoresistance and, more recently, solar cells. Until now, however, perovskites have been assumed to be always crystalline. ‘There were no predictions of any kind of quasicrystal formation around,’ says Widdra.

The dodecagonal tiling seen in the perovskite quasicrystal

Widdra and colleagues deposited a thin film of their perovskite, barium titanate (BaTiO3), on a platinum surface. The researchers then used scanning tunnelling microscopy to examine the short range, real space atomic structure, and electron diffraction to examine the longer range structure. They found that the interface of their oxide with the platinum surface had created a quasicrystal with a thickness of 0.4nm.

‘The discovery of this perovskite quasicrystalline monolayer grown on a periodic substrate is quite a surprise,’ says physicist Ronan McGrath at the University of Liverpool in the UK. ‘[It] adds to the growing list of physical quasicrystalline systems … [and] it will undoubtedly generate considerable interest and further experimental and theoretical work, to elucidate the details of the structure and the formation mechanism.’

Chemist Christopher Murray at the University of Pennsylvania, US, calls the work ‘a wonderful example of how you do materials science’. He believes scientists must have missed the structure in the past because they did not know what they were looking for. ‘This material, barium titanate, has been studied exhaustively,’ he says. ‘It has been looked at from all different angles, for all different methods of preparation. So it’s intriguing to think that this group, using these powerful tools to look at surface structure, have been able to identify a very convincing quasicrystal.’

Physicist Renee Diehl at the Pennsylvania State University in the US believes the discovery shows that quasicrystal films cannot be a rare formation. ‘With the right combination of film and substrate, it might be achieved for any material,’ she says.