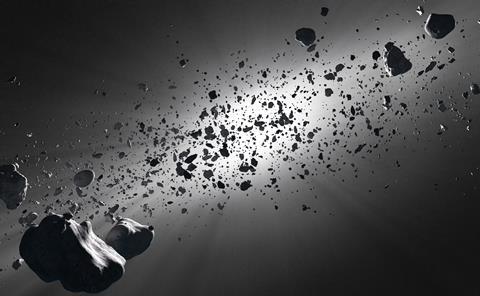 Researchers have found a mechanism that could explain how soot forms and grows as a result of incomplete combustion of hydrocarbon fuels. The finding may also explain how interstellar dust forms under similar conditions, and could could lead to more efficient ways of reducing harmful pollutant emissions as well as better ways to make useful carbon-based materials.

For decades scientists have attempted to solve the puzzle of how solid soot particles form at high temperatures from the gaseous polycyclic aromatic hydrocarbons (PAHs) produced when hydrocarbon fuels burn. Although previous mechanisms have been suggested to account for the missing step – including PAHs forming clusters via weak forces or covalent bonds – these have fallen short because the proposed bonding mechanisms are too slow and require high activation energies, while PAHs are too volatile to condense at the temperatures at which soot forms.

Now, a team led by Hope Michelson at Sandia National Laboratories in California, US, have analysed the particles in flames from various hydrocarbon fuels and discovered that PAHs can evolve into soot via chain reactions of resonantly stable radicals (RSRs). Such radicals had been studied before but were thought to be involved in single reactions to make bigger PAHs that might be able to condense. Instead, the new mechanism suggests RSRs propagate chain reactions, involving steps that form increasingly bigger and stable RSRs that move the reaction forward to form PAH fractal clusters via covalent bonds.

‘We saw the sequence of resonance-stabilised radicals in every flame we studied with every fuel,’ says Michelson. ’It was an “AHA moment” when we realised that these radicals could propagate a chain reaction that can cluster hydrocarbons with low reaction barriers.’

Michelson and colleagues were curious about the role of radical species they kept seeing in the mass spectra for particles obtained from flames. Follow-up experiments suggested that the RSRs lost their resonance stabilisation when they reacted with other hydrocarbon species. These subsequently regained the lost stabilisation by losing a hydrogen atom which was found to require a low activation barrier. This resulted in the formation of new larger RSRs which continued the chain reaction to rapidly grow covalently bound hydrocarbon clusters.

’One aspect of this mechanism is that it takes advantage of mechanisms for PAH growth suggested by other researchers and provides the missing link that is needed to cluster these PAHs into incipient soot particles,’ says Karl Johannson, another member of the research team. ‘It was surprising that the solution is relatively simple…and that no one had found it before.’

‘While the covalent bonds between the aromatic molecules were proposed in the 1990s, the idea that the reactive species are regenerating in the flame is new and could explain the rapid formation of soot particles that we see,’ says Markus Kraft who investigates combustion at the Universtity of Cambridge, UK. However, Kraft suggests further experimental evidence is needed. ‘The next step would be to measure the concentration of these species and compute the reaction rates to determine how important such a pathway is during soot inception.’