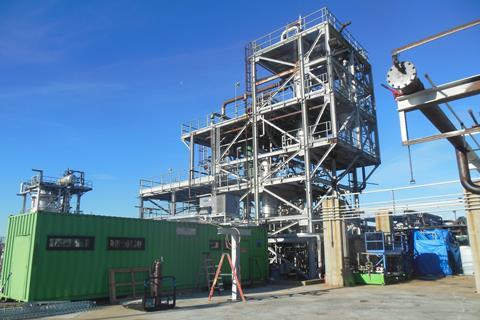 Industrial scale carbon-negative production of two commodity chemicals has been achieved for the first time using a genetically modified bacterium that can turn waste carbon dioxide into acetone and isopropanol. The work, which offers a blueprint for making other chemicals, holds promise for a more sustainable, renewable and environmentally-friendly chemical industry as the world strives to shift from fossil fuels to a circular carbon economy.

Acetone and isopropanol have a combined market value of over $10 billion (£7.4 billion). They are widely used as industrial solvents and to make plastics, including acrylic glass and polypropylene. However, they depend on fossil fuel-derived hydrocarbons, resulting in significant carbon emissions during their production.

Michael Jewett’s lab at Northwestern University in Illinois, US, working with LanzaTech, a carbon-capture company based in the same state, used synthetic biology to develop the first sustainable and scalable carbon-negative approach for producing acetone and isopropanol. ‘We have a climate emergency, all linked to the unabated release and accumulation of CO2 in the atmosphere,’ says Jewett. ‘Solutions for carbon-free, renewable production of energy exist, but most of the things around us and everyday products are based on hydrocarbon chemicals produced from fresh fossil sources.’

The team’s solution was to reprogramme the carbon-fixing bacterium Clostridium autoethanogenum, which naturally ferments carbon oxide gases for energy, resulting in ethanol as an end product. LanzaTech already operates two commercial plants that use this bacterium to convert steel industry emissions into ethanol. 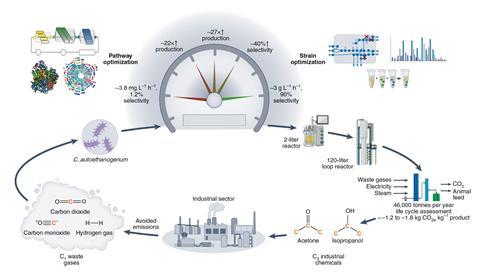 Crucially, the researchers used in vitro cell-free tools, which let them control and study biochemical reactions without interference from other complex interactions present in living organisms. This sped up the discovery and optimisation process, turning what would normally take up to a year into a matter of weeks.

The team eventually created a process that operated at high rates for weeks at a time. This was then piloted at an industrial scale in a 120 litre loop reactor connected to a carbon dioxide waste stream from a steel plant. Analyses revealed that the process locks in 1.79kg and 1.17kg of CO2 into acetone and isopropanol, respectively per kilogram of end product after offsetting carbon emissions during the process. By comparison, the fossil fuel approach emits 2.55kg and 1.85kg of carbon dioxide per kilogram of acetone and isopropanol, respectively.

‘A key feature is that acetone and isopropanol can be separated using similar technology as ethanol, which allows us to use the same [LanzaTech] plant infrastructure and switch between products by simply changing the microbe,’ explains Jewett. ‘This is a paradigm shift to the chemical industry, where a plant is typically purpose built for a certain product and production cannot be easily changed.’

‘The environmental benefits of this process could be significant,’ says Stephen Wallace, who investigates chemical-making microbes at the University of Edinburgh, UK. He is particularly impressed with the productivity and scale that was achieved. ‘The life-cycle analysis of the resulting gas fermentation clearly outperforms the corresponding petrochemical process,’ he says. ‘This suggests that this strain can effectively sequester CO2 in a net-negative bioprocess to generate industrial chemicals that would otherwise be derived from fossil fuels.’

‘The integration of this technology with established commercial infrastructure will be straightforward as both the bioreactor and much of the downstream product recovery infrastructure are already compatible with the products,’ says Jewett. ‘We believe that the framework developed here will provide a blueprint for development of further carbon-negative chemical production processes and holds promise to redefine the future of biomaking for planet and societal health.’