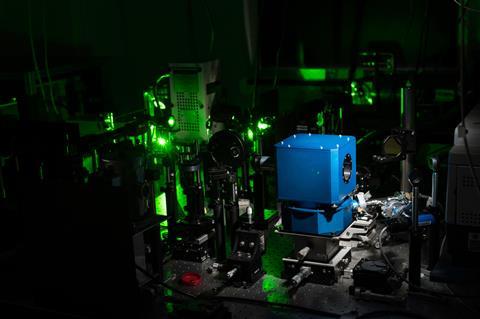 The laboratory of quantum materials at extreme conditions in the Dias research group at the University of Rochester, where they created the mystery room temperature superconductor

Editor’s note: This paper was retracted on 26 September following questions over how the raw data was processed.

The long-sought goal of a material that is superconducting at room temperature has been achieved – but the researchers at the University of Rochester, US, don’t know its exact composition. Ranga Dias and co-workers’ carbon, hydrogen and sulfur compound became superconductive at temperatures around 288K or 15˚C at pressures of 155GPa – 1.55 million times that of the Earth’s atmosphere. This means there is no need to cool it to -140˚C, something needed for today’s zero resistance commercial superconductors. ‘We want to celebrate this,’ Dias tells Chemistry World. ‘Having the first room temperature superconductor is one of the holy grails of physics.’

It probably represents the pinnacle of achievements in high pressure science

Because the material is made of elements with small atoms, the scientists couldn’t reveal their exact arrangement using x-ray crystallography. A Raman spectroscopy signal that provided structural details also disappeared above 60GPa. Theoretical work from other groups suggests that the substance’s formula will be in the range CSH6 to CSH8, but this hasn’t been confirmed. Nevertheless, Dias’ team and others are now seeking to reduce the pressures needed, enabling easier-to-use superconductor materials for transmission of electricity and powerful electromagnets. 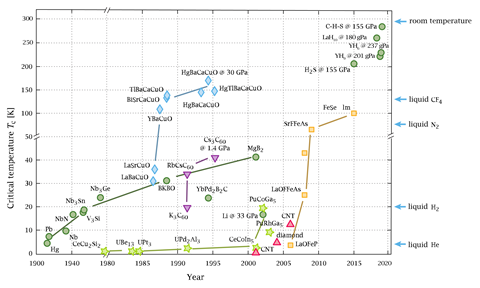 The development of superconducting hydrides has been a revelation for researchers looking to break the psychological barrier of room temperature superconductivity. Bardeen, Cooper and Schrieffer superconductors are represented by green circles, heavy-fermion ones by green stars, carbon allotropes by red triangles, buckminsterfullerenes by purple triangles, iron–pnictogens by orange squares and cuprates by blue diamonds

Dias’ team is one of several seeking room temperature superconductors in the tiny, extremely high pressure, spaces between the tips of two diamonds in diamond anvil cells (DACs). Dias stresses that his work is only possible thanks to Mikhail Eremets and colleagues at the Max Planck Institute for Chemistry in Mainz, Germany. In 2014, the German group showed that the critical temperature (Tc) below which hydrogen sulfide became superconducting was 203K at 150GPa. Since then, other compounds have raised the Tc figure. Both Eremets and a team led by Russell Hemley at the University of Illinois at Chicago, US, found that LaH10 had a Tc above 250K at 180GPa last year.

These materials are similar to metallic hydrogen, explains Dias. This substance has been predicted to be a high-temperature superconductor that forms at high pressures. Hydrogen-rich systems that behave similarly, but at lower pressures, like hydrogen sulfide and LaH10, ‘were on the right track’. The Rochester team added a third element because it makes more structures available. ‘You increase your chances’ of a higher Tc, Dias argues.

LaH10 and yttrium hydrides make clathrate structures, where yttrium and lanthanum atoms sit in-between hydrogen atoms, Dias explains. That differs from the covalent metal structure predicted for hydrogen at high pressures, which hydrogen sulfide emulates. ‘Carbon is an element where you can have many bonds, so it’s easy to make a covalent metal,’ Dias says. ‘We thought adding carbon to sulfur may make a difference. It’s a little bit of intuition there.’

The researchers also make the new material in a different way to LaH10, which forms at very high temperatures and pressures. By contrast, the Rochester team’s method shines a milliwatt green laser into the DAC containing a carbon–hydrogen–sulfur mixture for several hours at 4GPa pressures before raising them further. The DAC also contains probes that show the material’s resistance fell to zero and had magnetic properties expected of a superconductor. ‘We can synthesise this in a controlled manner,’ Dias says. ‘I had a nice discussion with Professor Eremets yesterday and I gave him all the ingredients so that he can follow the exact same recipe. It’s tricky in the sense that the failure rate is high, but with a lot of patience, you can definitely get it done.’ 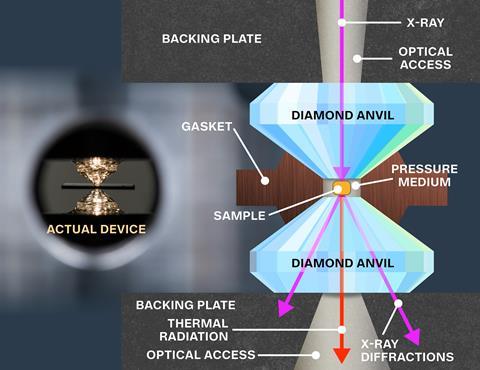 Maddury Somayazulu from Argonne National Laboratory in Chicago, Illinois, who played a prominent role in the LaH10 work, calls the work ‘brilliant’. ‘It probably represents the pinnacle of achievements in high pressure science having established room temperature superconductivity,’ he says. Somayazulu says that the data is ‘very clean, precise and extensive’ and ‘leaves no doubt about its veracity’. He adds that single crystal diffraction, x-ray absorption near edge structure and x-ray Raman spectroscopy will reveal the material’s structural secrets.

Eva Zurek’s team at the State University of New York at Buffalo, US, is one of those that has studied carbon–sulfur–hydrogen systems in theoretical calculations. Zurek notes that they cannot explain the ‘extraordinarily high’ Tc measured by Dias’ team. ‘It is exciting that this superconducting system is composed of p-block elements that can potentially form strong bonds,’ she adds. ‘If such bonds are made it might be possible to quench the superconducting phase to lower pressures.’ A room temperature, room pressure superconductor ‘would definitely warrant a Nobel prize’, she adds.

Dias says that the important next steps include understanding the material’s structure and superconductivity mechanism. ‘That may allow us to design a material that is a high-temperature superconductor at much lower pressures or possibly ambient pressure,’ he says. His team has been working on this challenge and started up a company called Unearthly Materials. Dias also adds that his team has results appearing soon relating to yttrium hydrides.

Roald Hoffmann from Cornell University, US, notes that Hemley and Somayazulu’s work on LaH10 has also progressed recently, including a preprint that has not been peer reviewed that shows high-pressure superconductivity up to 556K, or 283˚C.2 ‘I think the chances of high pressure superconductivity featuring in future awards of the Nobel or Wolf Prize are high indeed,’ says Hoffmann, himself a Nobel prize winner.

Dias is in no doubt about who deserves such a prize. ‘It should go to Mikhail Eremets,’ he says. ‘He did the game changing work in 2014.’