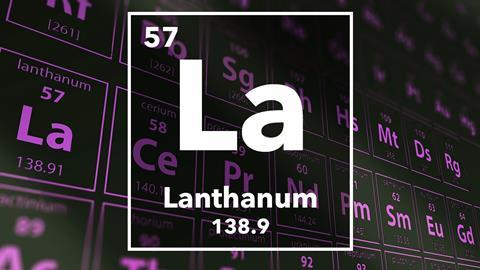 The element with film star status

Hello and welcome to Chemistry in its element, I'm Meera Senthilingam. This week the element that resembles a humble, but crucial film star, that appears everywhere but is often forgotten about. Brian Clegg uncovers the secret world of lanthanum.

The periodic table is a wonderful structure. In its neat, ordered way, it predicts the behaviour of atoms as they follow a step-by-step pattern of increasing atomic number. At first glance, it's a simple matter of running across row after row. But take a closer look at barium and its obscure neighbour to the right, hafnium. Barium is atomic number 56. hafnium is 72. There are 15 elements missing. On a modern table, these appear at the bottom in a separate, floating row. They are the lanthanides – and we're taking a look at the element that gave its name to the whole group, lanthanum.

For most of us, giving the name to that group is about all lanthanum is known for – so it comes as quite a surprise to discover just how many ways it is used – we'll find it everywhere from cameras to swimming pools. But before we uncover the secret world of lanthanum, how did it end up sounding like a Victorian opium drink? It was one of the earlier lanthanides to be discovered, by the Swedish scientist Carl Gustav Mosander, working at the famous Karolinska Institute in 1839, though it was 1923 before the pure metal was produced. 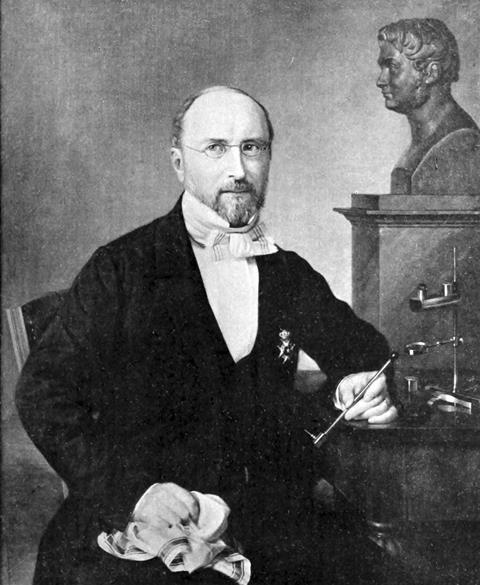 One of the most reactive of the lanthanides, readily oxidising and bubbling away in water, lanthanum turned up unexpectedly in a cerium salt sample Mosander was working on. It was because of its sneakily unexpected appearance in the sample that Mosander called it lanthanum, from the Greek word lanthano, meaning to escape notice – in fact the first recorded reference to it in 1841 calls it 'another metallic oxide, which has hitherto lain concealed in oxide of cerium'.

When it comes to using lanthanum, it best resembles a successful movie bit part player. Someone who never gets the lead role, but appears in film after film, solidly portraying different characters. Not a particularly expensive material to produce, lanthanum's many roles remain of a supporting kind, playing an essential part but avoiding the limelight.

It is often added in small quantities to metals like iron and steel to make them less brittle, or to tungsten to improve the quality of electrodes used in arc welding. On a lesser scale of heat it also contributes to the spark produced by cigarette lighters using a material called mischmetal (literally mix metal in German) at least a quarter of which is usually lanthanum, giving the element its one starring role. 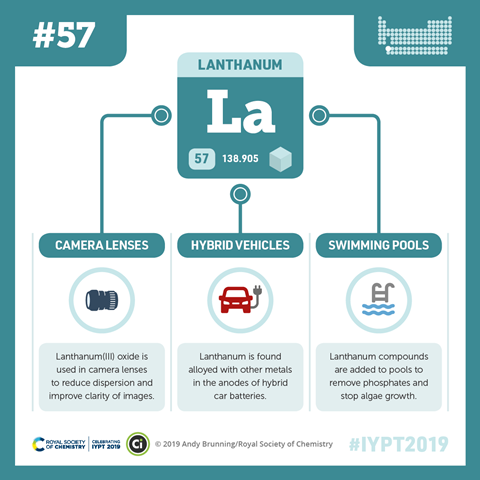 Much of the lanthanum we experience is invisible, incorporated into glass. For many years, lead has been added to glass to give it an increased refractive index, producing an extra-shiny crystal effect. As the refractive index goes up, light travels slower in the material and the light is bent more as it travels from air into the glass. Lanthanum is much better than lead at pushing up the refractive index without dispersing the light too much, this extra clarity means that lanthanum oxide is now used widely in lenses for cameras and telescopes.

Some of those lenses will be pointed at celebrity swimming pools, where one of the many chemicals likely to be added to the water is a lanthanum salt, aimed at latching onto phosphates that would otherwise act as in-water fertiliser, encouraging green algae to discolour the pool. And I could go on about its use in rechargeable nickel Metal Hydride batteries or gas mantles – but I'm sure you get the point. 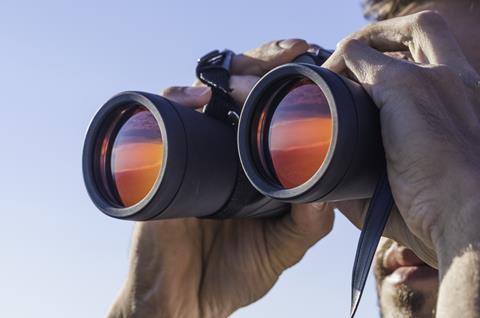 Lanthanum may be useful for scanning distant views through binoculars, but a final use of the element is in peering into the past. We're familiar with radiocarbon dating, based on the decay rate of carbon 14, being used to date biological specimens. Such radiometric dating relies on the fact that radioactive materials decay with a known half-life. This means that, for instance, with carbon 14, half of the original amount will be left after around 6,000 years. The remainder will half again in the next 6,000 years, and so on. By measuring the amount of the radioactive substance in an object, relative to the product of its decay, we can determine its age.

But to use carbon dating we need something with a reasonable amount of carbon in it – usually something that was originally living – and for the object to have been formed no more than about 60,000 years ago, after which too little of the carbon 14 is left. This makes it useless when attempting to date rocks that are hundreds of millions of years old. Here, one of the alternative dating approaches is so called La-Ba dating.

Lanthanum and the element before it in the periodic table, barium, have an exotic relationship. Barium 139, for example, has a half-life of just 68 minutes before it breaks down to form lanthanum 139 – not suitable for dating anything older than a loaf of bread. But lanthanum 138 has a hefty half-life of around 100 billion years on the way to forming barium 138, making it ideal for dating ancient granites. Working on these timescales makes for a fairly loose idea of accuracy. One paper on the La-Ba technique proudly announces that rocks have been dated 'with the high precision of plus or minus 3.7 million years'.

This is not the kind of accuracy we hope for in train timetables, but when you're dealing with something half a billion years old, it makes a pretty good hit for lanthanum, the element that despite its name, shouldn't escape notice.

So it makes metal stronger, camera lenses better and keeps swimming pools clean. This element really does like to get around. That was Brian Clegg with the hidden depths of lanthanum. Next week an element that may appear just normal or indistinct but is truly adored by the people that know it – a trait it seems to share with a famous mermaid.

On my recent trip to Copenhagen I spent a long time looking for the famous little mermaid that is symbolic of the city. When I found it I was surprised to see that it is rather insignificant, but this did not seem to lessen the special attention that it held for tourists from all over the world. I think it's a bit like the metal hafnium, first discovered in the mermaid's city of Copenhagen. It too seems rather insignificant at first sight and yet it holds the attention of a variety of scientists because of its rather special properties.

And you can learn the history and uses of Hafnium that make this element so loved by scientists worldwide with Eric Scerri in next week's Chemistry in its Element. I'm Meera Senthilingam, thank you for listening and see you next week.