Self-replicating rotaxane may open the door for autonomous chemical synthesis

Scientists in the UK and Malaysia have created a self-assembling rotaxane that can replicate itself. The result may lead to the development of autonomous chemical systems that mimic cellular processes. 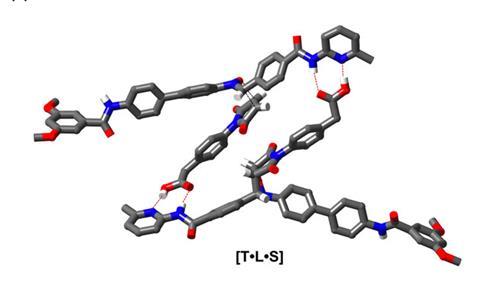 During self-replication, a 1,3-dipolar cycloaddition forms a new rotaxane thread

Life is adept at faithfully reproducing complex molecules such as DNA and many research groups are attempting to re-create similar phenomena in the lab using a library of synthetic chemicals. ‘Self-replication processes are inherently interesting from the point of view of biology as the self-replication of molecules (ie DNA) is the chemical basis of life,’ remarks Steve Goldup, an organic synthesis researcher from the University of Southampton, UK, who was not involved in the work.

But copying the way in which such complex molecules self-replicate using just lab chemicals has proven to be very difficult. ‘We’ve published a body of work … where we’ve made small molecules that are capable of copying themselves,’ comments Douglas Philp from the University of St Andrews. ‘Just having a small molecule that replicates itself is not … ultimately very complex.’

Philp and his colleagues wanted to create an intricate synthetic replicator to demonstrate that it may one day be possible to construct a chemical network that could behave like a protocell – a simple self-replicating body that could be a stepping-stone towards life. For the group, the ideal candidate for this was a rotaxane – a dumbbell-shaped compound that is threaded through a cyclic molecule.

Philp explains that the initial synthesis of a rotaxane is ‘quite conventional’. Often, a thread molecule is held within a macrocycle before this pseudorotaxane is capped at each end via a simple functionalisation reaction. But in this scenario both ends are inert and cannot facilitate replication. 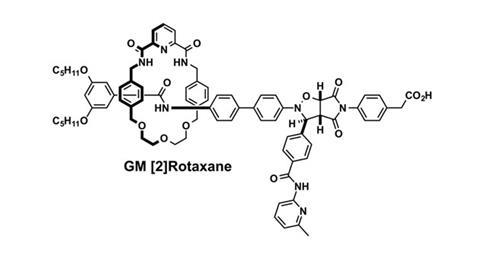 The solution was to ensure one of the ends acts as a reactive site. ‘So effectively you have a rotaxane that has a linear component with two stoppers,’ says Philp. ‘One of the stoppers is inert … and the other stopper is actually replicating.’ Under these conditions, Philp and his colleagues were able to produce a pseudorotaxane with a macrocyclic amide threaded onto it. The reactive cap is a nitrone, which also acts as the initiator for replication and, with the help of two recognition molecules, amidopyridine and carboxylic acid, the rotaxane can be copied from the existing pseudorotaxane scaffold. The building blocks for these scaffolds were synthesised in a number of different solutions, with the thread and rotaxane both being constructed in deuterated chloroform.

Although the rotaxane is able to self-replicate, there have been some issues in how much rotaxane can ultimately be generated. Philp explains that the macrocycle may react with the nitrone and block any further replication: ‘If it does that, then effectively the system is dead because the nitrone is the reactive bit and can’t react.’

The fact that Philp’s team have created a self-replicating rotaxane system in the first place, irrespective of its inefficiencies, is a promising sign, according to Goldup. ‘The example here pushes the boundaries of what has been demonstrated up until now in artificial reaction systems,’ Goldup tells Chemistry World. ‘Implementing self-replication into these systems brings the idea of an autonomous chemical nanotechnology a (very small) step closer.’