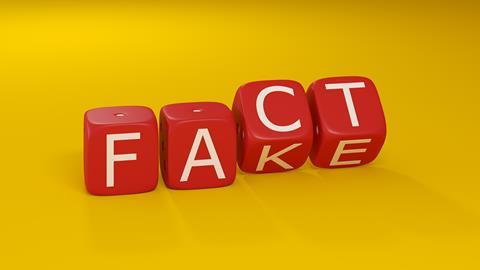 There’s no quick and easy way to fix the problem of ’scientific misinformation’, argues a new report released by the Royal Society.

Although scientific misinformation is available online, it’s not clear what its impact is, the report says, citing a Royal Society survey of the UK public that found that found that most people believe Covid-19 vaccines are safe, climate change is the result of human activity and 5G technology is not harmful to health. During the pandemic, however, there’s ‘no question’ that there was enough misinformation to cause harm, Kelly notes.

The report suggests that echo chambers – both online and offline – where people encounter information that reinforces beliefs they already hold are less common than previously thought. It also suggests that there is little evidence for the filter bubble hypothesis, which suggests that algorithms result in people only coming across information that is in line with their thinking.

Jevin West, an information scientist at the University of Washington in the US, agrees, noting that rampant content removal ‘continues to exacerbate these levels of distrust’. Taking content down sometimes fuels discussions about the conspiracy of censorship and ends up causing more damage, he says.

The report recommends that the UK government should support fact checking to address ‘information deserts’, where few or no authoritative voices exist. To do this, the government can approach the country’s national academies and learned societies, Kelly adds. ‘The fact checking sector is one that is quite vulnerable.’

There’s no standard way to resolve the issue of misinformation, Kelly says. ‘It will take a lot of hard work.’ Those trying to tackle the problem ‘won’t solve it, they’ll just push the balance into a better place’. It’s especially difficult in science, he notes, because determining the veracity of research claims is a long process involving authors, reviewers, editorial boards and other stakeholders.

‘Ultimately, we will need to see legislation which can address the incentives of business models that shape the algorithms determining the spread of content,’ the report says. ‘Scientists will need to work with lawyers and economists to make sure that the particular sensitivities of scientific misinformation are considered when legislation is framed.’