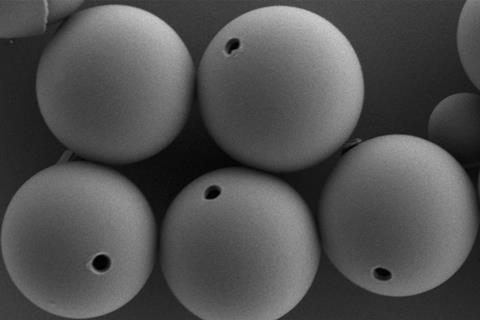 Scanning electron micrograph images of the cell-mimics displaying micropores. While the artificial cells look simple they are the culmination of years of work to create a system that can use chemical energy to create concentration gradients to take up a range of payloads

Artificial cells have been created that have no biological components and rely entirely on chemistry to capture, store and release microscopic payloads using light. The cell-mimicking microcapsules could be useful for drug delivery, removing contaminants or collecting biological samples in living organisms, say the researchers.

Living cells use active transport – which requires energy as well as specialised proteins and enzymes – to pump ions and molecules across their membranes against concentration gradients. But it has been challenging to mimic this in non-living systems without incorporating some biochemical machinery.

‘[Our] system is entirely synthetic [and] borrows no material from biology,’ says Stefano Sacanna at New York University who led the work. ‘It is certainly the first that can actively ingest and expel cargo.’

To make the cells, Sacanna and his colleagues first developed artificial membranes using self-inflating emulsions. These comprised oil droplets that were made by reacting a hybrid silica-based material called polyhedral oligomeric silsesquioxanes with a hydrophobic monomer. 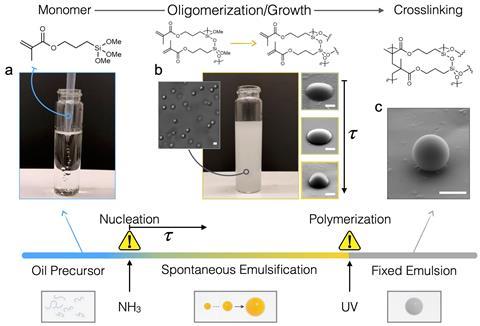 The cell mimics were created using silsesquioxanes-based emulsions with a hydrophobic monomer that was then hardened using UV. Scale bars 1μm

These droplets were then chemically transformed using sodium hydroxide. This caused charged monomers to produce an internal osmotic pressure that forced droplets to spontaneously expand in water. Once at the desired size, the water-filled membranes were permanently hardened using UV light.

The researchers then created a tiny hole, or micropore, in the membrane for cargo to travel between the interior and exterior of each cell – akin to a membrane-spanning protein in living cells. They achieved this by using a sacrificial polystyrene inclusion that was incorporated into each artificial membrane when they were first made. The polystyrene was then dissolved with tetrahydrofuran.

Finally, the team developed a micro-pump for moving cargo in and out by using a light-activated iron oxide catalyst inside each cell. When illuminated by blue light, the catalyst harvests chemical energy from hydrogen peroxide in the cell, creating a chemical gradient to draw in cargo. To release cargo on demand, all that’s required is lowering the pH at which the catalyst is activated, which reverses the effect.

Sacanna’s team found that when cells were loaded, they could be stored for several months without any detectable cargo loss. ‘It was a great feeling to see the capsules working and eating up stuff. Every piece of the puzzle took months, sometimes years, of research and development,’ says Sacanna. He points out that the hydrogen peroxide fuel is not suitable for most living organisms so his team are hoping to make the system more biocompatible.

‘This is an absolutely fascinating study and very nicely shows how diverse life-like features can emerge from a relatively small number of molecular building blocks,’ says Yuval Elani, who investigates synthetic biology at Imperial College London. ‘This is all the more remarkable given that biological components weren’t used, yet intricate behavioural complexity was still achieved.’

The team demonstrated the cell-mimics swallowing, storing and releasing polystyrene beads, other emulsion droplets and Escherichia coli in various colloidal suspensions. The cells even captured silica rods easily despite the rods needing to be lined up with the micropore, suggesting that the local gradient actively positions particles relative to the cell surface for uptake.

‘The approach on the whole is a feat of precision microengineering,’ adds Elani. ‘A single micropore, in capsules of highly uniform size, all produced via bulk assembly, means they can be manufactured at-scale.’