Shine on you crazy Diamond

The Diamond Light Source based at Harwell, UK, is celebrating its 10th anniversary and five years of operation 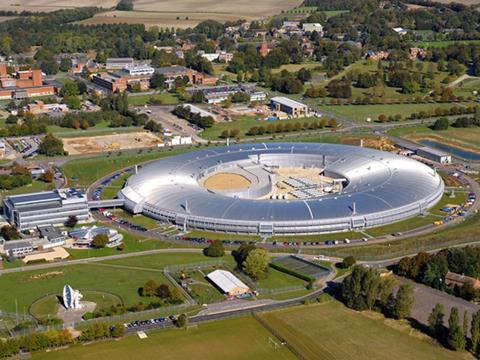 As the world celebrates the new year, the UK’s Diamond Light Source is celebrating five years since it opened its doors to scientists looking to probe the structure and properties of materials with brilliant beams of light. It is now a decade since the joint venture between the Science and Technology Facilities Council and the Wellcome Trust established Diamond as the successor to the UK’s previous synchrotron source at Daresbury. One of the world’s brightest sources of electromagnetic radiation from infra-red to x-ray, Diamond has so far received £380 million of investment to provide scientists worldwide with its powerful crystallographic and spectroscopic tools.

Diamond will have industrial customers for a long time to come

‘I can’t think of anything that has changed our lives more than synchrotrons,’ says Venki Ramakrishnan, a structural biologist from the Medical Research Council’s Laboratory of Molecular Biology in Cambridge, UK. Structural biologists are among the synchrotron’s biggest proponents, using its crystallographic capabilities to investigate the structure of biomolecules – Ramakrishnan’s experiments at Diamond’s Daresbury predecessor helped to determine the structure of the ribosome, earning himself a share in the 2009 Nobel prize for chemistry.

Diamond recently reached a milestone in this regard, depositing its 1000th structure in the Protein Data Bank. And among the proteins being studied at Diamond is the group that received a Nobel nod in 2012 – G protein-coupled receptors, of particular interest to the pharmaceutical industry. Companies such as Heptares have made extensive use of Diamond to elucidate the structures of GPCRs in their structure based drug discovery programmes. ‘Diamond engaged with industry from the very start,’ says David Brown of Cangenix, who uses Diamond to provide the biotech sector with expertise in structural analysis. Brown praises the customer-focused approach, offering automation and remote access: ‘It’s a very industrialised process; Diamond will have industrial customers for a long time to come.’

As Diamond has expanded, adding beamlines and new techniques, so the industrial and academic demand for time at the facility has increased and it is now comfortably oversubscribed. ‘Researchers have realised that synchrotrons can make a huge difference to their work,’ says Sandy Blake of the University of Nottingham, UK. Last year, researchers at Nottingham made headlines with the discovery of a low-cost and highly selective carbon capture technology: a metal–organic framework, NOTT-300. The powder x-ray diffraction studies conducted at Diamond played a vital role in uncovering the source of this selectivity by identifying the hydrogen bonds responsible for binding carbon dioxide within the framework, says Blake. But analyses are not just restricted to static samples.

Moniek Tromp of the Technical University of Munich, Germany, employs the synchrotron’s x-ray absorption beamlines to conduct dynamic experiments, observing the evolution of catalytic species in situ to understand reaction mechanisms as they happen. Tromp is pushing the limits of these high-speed experiments in investigating light-induced catalytic processes. ‘Obtaining detailed structural and electronic information on intermediates, at these fast time scales down to pico- and femtoseconds, is only possible at new generation synchrotrons like Diamond,’ she says.

Diamond in the rough

Diamond is also having an impact on environmental science. In 2010, around 1 million m3 of caustic ‘red mud’ waste from an aluminium processing plant in Hungary broke containment and flooded downstream poisoning waterways and the surrounding land. As part of the international response, Ian Burke of the University of Leeds, UK, requested emergency access to analyse samples from the affected areas to determine the presence and mobility of toxic metal species – specifically chromium, vanadium and arsenic. ‘Normally research time [at Diamond] is planned years in advance,’ says Burke, ‘but they were able to respond very quickly in this case. The techniques are not hi-tech for Diamond but this is the only place I could have got these data.’

X-ray absorption experiments revealed the speciation of chromium, arsenic and vanadium in the samples, showing that the chromium and arsenic species had limited mobility and solubility, so were relatively harmless to the environment. Harmful vanadium species, however, were found to persist in a form that could spread, even following neutralisation treatment. Burke’s findings therefore justified the Hungarian authorities’ decision to employ an expensive strategy of scraping the affected land, rather than relying solely on chemical remediation. 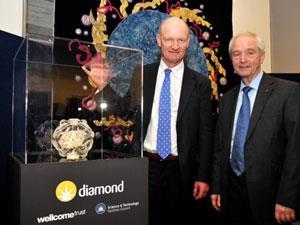 The facility currently hosts 22 beamlines, with plans to expand its capacity. Now in phase three of its development, a further £110 million will be invested installing 10 beamlines over the next six years and upgrading those currently in operation. The decisions over which capabilities to add or develop are taken in consultation with the user community and among the planned improvements are in situ crystallisation, x-ray scanning techniques with nanoscale resolution and full-field x-ray imaging for three-dimensional microscopy of cells.

David Willetts, UK science minister, commemorated Diamond’s first decade with the unveiling of a glass sculpture of the human enterovirus 71, which can cause foot and mouth disease, whose structure was solved at Diamond. ‘This world class facility is such an important research tool,’ said Willetts. ‘Diamond is helping the UK get ahead by tackling challenges related to health, energy, the environment and manufacturing.’